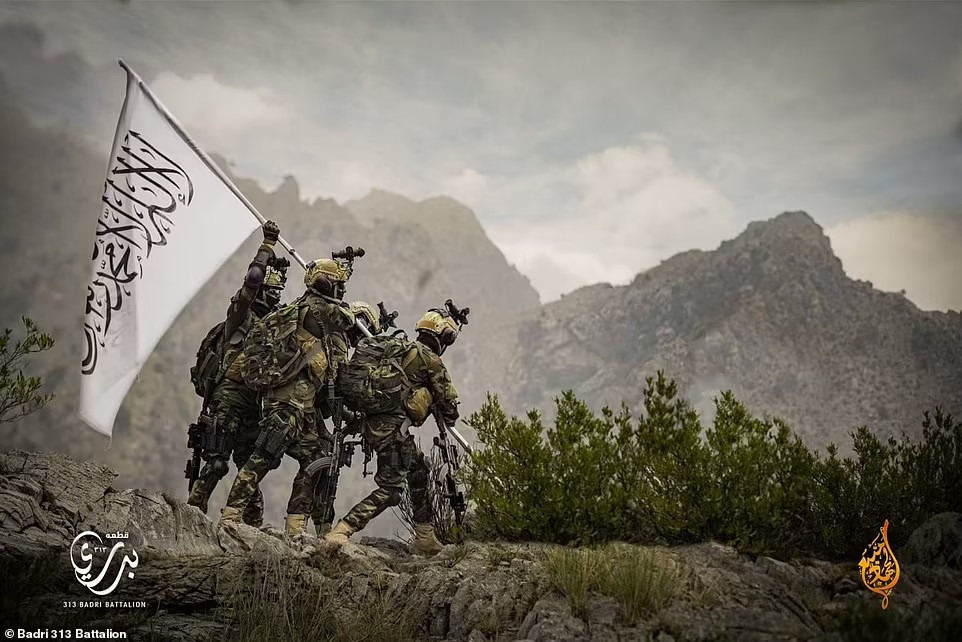 The world has seen the symbolism the Taliban chose to use, imitating the picture of soldiers raising the flag on Iwo Jima. A hundred articles have been written about the insult that image sent around the world. Closer examination reveals the symbolism that was planned. The messages the Taliban incorporated into that picture.

First we will look at the obvious messages the general media caught onto and understood.

The Badri 313 was reportedly named after the Battle of Badr that is written about in the Qur’an, in which the Prophet Mohammed successfully defeated an enemy force with just 313 men – some 1,400 years ago.

We can’t hope to understand the symbolism until we accept the fact the symbolism is grounded in religion. First we need to look at the root of that symbolism, why they chose that name, that brigade, and pointed to that battle.

In the name of Allah, the Beneficent, the Merciful.

The battle of Badr was the most important among the Islamic battles of Destiny. For the first time the followers of the new faith were put into a serious test. Had victory been the lot of the pagan army while the Islamic Forces were still at the beginning of their developments, the faith of Islam could have come to an end.

No one was aware of the importance of the outcome of the Battle as the Prophet himself. We might read the depth of his anxiety in his prayer before the beginning of the Battle when he stood up supplicating his Lord :

God this is Quraish. It has come with all its arrogance and boastfulness, trying to discredit Thy Apostle. God, I ask Thee to humiliate them tomorrow. God, if this Muslim band will perish today, Thou shall not be worshipped.

At this battle in which the pagan army consisted of 950 fighters and 314 (including the Messenger S), the Islamic defense was a combination of three defensive lines :

The total strength of the Afghan national security forces – including the army, special forces, air force, police, and intelligence – was more than 307,000 at the end of April, the United States Special Inspector General for Afghan Reconstruction (SIGAR) said in a report last week.

The combat forces available on any given day are likely about 180,000, according to an estimate by Jonathan Schroden of military think-tank, CNA.

The precise strength of the Taliban, on the other hand, is not accurately known. UN Security Council monitors last year said the group had between 55,000 and 85,000 fighters.

Afghanistan is made up of people who have been fighting oppression for generations. The reason for the pull out was plain. Afghanistan has been fighting civil wars for generations. That was not going to change. Muslims are divided into many different denominations with a wide range of beliefs, holy leaders, ideals, and doctrines. Symbols used in that picture tell us exactly what the Taliban’s religious beliefs center on.

One of the keys is found in the prayer offered before the battle of Badr, “if this Muslim band will perish today, Thou shall not be worshipped.”

It should be no surprise the Taliban believes they have the one true belief, the one true worship, and they are messengers from God. Many religious factions thrive on the same belief. That is what has been causing the wars in Afghanistan for over 1400 years.

Another important symbol is the flag in the picture.

The Flag is a Solid White Banner Containing a Black shahada which says: “There is no god but God. Muhammad is the messenger of God.”

Inside that banner is the word, “messenger.” This in fact is a symbol we find repeated in the message the Taliban sent all over the world. Of course the world is facing a religious faction that believes they are messengers, they carry a message from God, and the fashion in which they dressed tells us exactly how they plan on delivering that message. The name of the brigade, as well as the way they chose to dress those men points to one detail, their message will be spread by military conquest. Which is no real surprise. It has been that way in Afghanistan for over 1400 years.

While looking at the numbers we need to ask ourselves, how did the Taliban win so quickly over such a dominating force? Let’s look at the obvious. The Taliban may have had a force of 85,000 soldiers. The Taliban controlled about 90 districts at the beginning of July 2021. By mid August the Taliban controlled 391 districts. Every invading force needs to leave personal behind to maintain control of land, towns, villages, and cities won in battles. With a force of 85,000 in 391 districts, the Taliban would have to leave 39,100 solders behind to guard each district with only 100 men. That left a force of roughly 45,000 soldiers to invade a capital with a population of over 4.5 million and approximately 180,000 trained and equipped solders. Looking only at military strength, the Taliban was out numbered 4 to 1. A figure very close to that in the battle of Badr. That of course does not include armed militia that may have doubled the amount of available forces.

When we look at a defensive stance in the capital Kabul, we see 4 major roads leading into the city, crossing mostly open area. The distance from other major cities captured earlier is about 350 miles, taking about 12 hours of travel. The Taliban had no air power and limited defense against any air attack. Moving approximately 10,000 troops across each open highway against an enemy with complete air superiority sounds more like a suicide mission in modern warfare. So what happened? Why did the Taliban make such a decision? Of course those symbols are designed to make us think God had some control over the situation. That is what the Taliban wants us to think. We also need to consider the widespread censorship deployed over the entire Internet. Distribution of that picture could have been shut down in a nanosecond. Instead it was broadcast all over the world because it sent a message people above the Taliban wanted the world to see. Do the uniforms and equipment tell us who provided the protection to move 45,000 troops over 350 miles of open roads with no resistance?

Up to this point we’ve reviewed the obvious. The Taliban is a militant religious group who believes they have a message from God and plan on spreading that message through military conquests. By why did they choose to copy the symbol of Iwo Jima?

Within days, some 70,000 U.S. Marines landed on Iwo Jima. Although they significantly outnumbered their Japanese enemies on the island (by a more than three-to-one margin), many Americans were wounded or killed over the five weeks of fighting, with some estimates suggesting more than 25,000 casualties, including nearly 7,000 deaths.

Within the symbolism lies the same 3 to 1 odds found in the Battle of Badr . Although the Japanese lost Iwo Jima, the symbolism for the Taliban sends the message, they are ready to fight against Americans with over whelming odds.

Iwo Jima enabled America to launch attacks directly against Japan. The symbolism used in Kabul by the Taliban is evident.

A close examination of the picture reveals a treasure trove of symbols. To understand those symbols we need to look at both the physical and spiritual interpretations.

The most noticeable is the uniforms warn by the Taliban. US solders wore tan desert camouflage in Afghanistan. The Taliban modeled green jungle camouflage. Which brings the question, did they use captured uniforms in Kabul or were these uniforms procured to send a specific message? Of course they were worn to send a message. The Taliban has no plans to stop in Afghanistan. They plan on invading lands where green jungle and forest camouflage is required.

The Taliban sported the latest in US long rifles. Not the outdated M16 series rifles shown in other photos out of Kabul, but the latest in US military hardware complete with short range scopes and extended round magazines.

One of the most telling symbols are the full packs. A clear indication they plan on traveling.

Those night vision goggles send the deepest religious symbol. Night vision goggles are used to see in the dark of night. A spiritual symbol used to tell the world, their forces are in hiding. Those goggles are worn over their helmets. Symbolism showing us, they are hiding in plain sight. Notice each solder is masked. Note, no one wore a mask in the original Iwo Jima photo.

Each soldier is outfitted with a side arm. Those pistols tell us, they are supplied with a number of weapons. 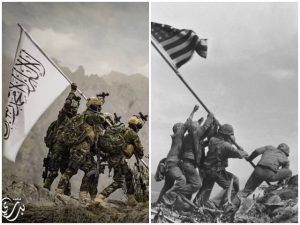 The photo in Iwo Jima shows US solders chose the highest point. Which is common sense whenever raising a flag in victory. In Kabul they chose a low point with higher points clearly shown in the background. A symbol showing this is only the beginning. At this point we don’t know the name of the mountain range. Typically mountain ranges carry some sort of symbolism especially in religious worlds.

The most sinister and bewildering symbols in that photo is the addition of black elbow and knee pads. Parts of a uniform not found in any other photos of US military uniforms in Afghanistan. Black gloves, elbow, knee pads, and masks are the uniform of choice worn by Antifa all over the world. Is the Taliban providing a subliminal message to the world?

Also notice the lack of any insignia identifying which army the soldiers are fighting for and which unit they are assigned to.

That picture in Kabul was staged, orchestrated, and most likely took hours to plan and arrange. That picture sends signals to the world, and contains a number of symbolic, hidden messages. Like the attack on America, the targets as well as the date, 9/11 hold deep, sinister messages for those who planned the attack. We would expect that picture to contain much more information than what lies on the surface.