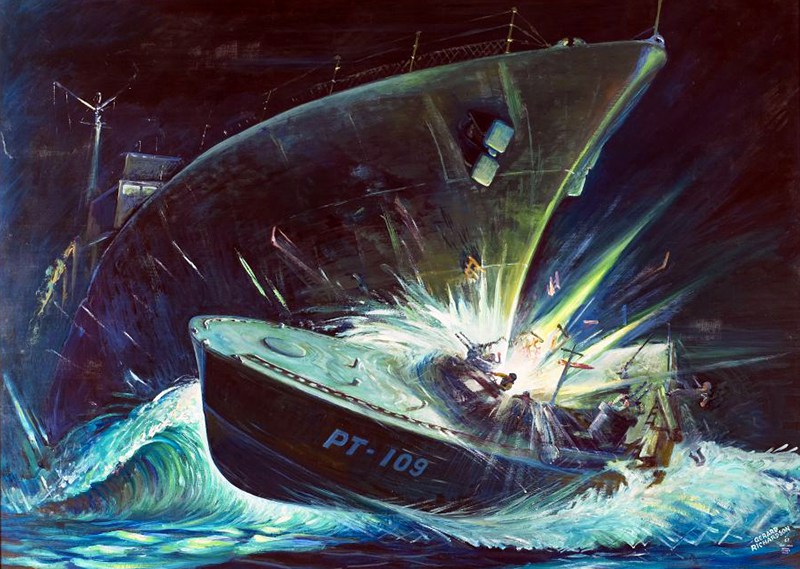 75 years ago today, in the midst of WWII, a tragedy happened in the Solomon Islands. It took place in Blackett Strait, south of Kolombangara. On the night of August 1, the inky blackness was disorienting.

The Patrol Torpedo boat (PT 109) “stood at her station, one of fifteen PT boats that had set out to engage, damage, and maybe even turn back the well-known ‘Tokyo-Express'”  (Source).

In the ensuing battle:

“Thirty torpedoes were fired without damaging the Japanese ships. No US vessels suffered hits or casualties. Boats that had used up their complement of torpedoes were ordered home. The few that still had torpedoes remained in the strait for another try. PT 109 was one of the boats left behind” (Source).

At about 2:30 on the morning of August 2, a Japanese destroyer loomed out of the darkness on the starboard side. At first, the young lieutenant, Jack, thought it was just another PT boat. But then, as it loomed even closer, it became clear that it was not an American PT boat, but a Japanese destroyer. Jack attempted to turn the PT 109 out of the way of the destroyer. But there just wasn’t enough time.

The Japanese destroyer, Amagiri, rammed into the PT 109, cutting it in two. The crew of the PT 109 were thrown around, most of them into the water. At the same time, “spilled fuel ignited on the water, causing crews of the other PT boats to assume there had been no survivors” (Source).

Of the 13 crew members, 11 of them survived, while the other two were never recovered. Jack and some of the other crew members who weren’t thrown overboard swam around, helping their crew members climb back onboard what was left of the rapidly sinking PT 109. Patrick McMahon, however, had been badly burned by the exploding fuel and couldn’t swim. So, Jack – who had ruptured a spinal disk in the collision – towed McMahon by the life-vest strap all while cajoling an exhausted Charles Harris to keep swimming. Meanwhile, Leonard Thom pulled in William Johnston, who had “accidentally swallowed the heavy fumes that lay on the water” (Source).

At this point, their boat was sinking and the men were all exhausted – many of them were injured from the collision, and even more were sickened from the fumes. Rescue didn’t seem too likely. There were no American boats in sight and firing a gun could mean altering the Japanese.

Despite being in Japanese-infested waters, they had no choice but to abandon the boat and try swimming for the nearest island.

While Jack was an experienced swimmer, with so many men injured – and some even unable to swim – it was quite the ordeal. However, with Johnston and Edgar Mauer strapped to a plank, everyone else pulled and pushed their crew members through the dangerous waters.

Jack swam up to Plum Pudding Island, after some 16 hours in the water, still pulling McMahon by the life vest strap. Exhausted, Jack “had to be helped up the beach by the men he had towed. He collapsed and waited for the rest of the crew” (Source). He then got sick from the amount of water he swallowed during the swim.

Unfortunately, he had more swimming to do. There was too big a chance that this island, much like the waters, was infested with Japanese. And Jack’s men were in no condition to face a well-armed battalion of Japanese. Therefore, it was imperative that they find rescue quickly.

So, Jack set out again, this time into the Ferguson Passage, knowing that his fellow PT boats passed through when operating in Blackett Strait. Jack spent the night island hopping and bobbing in the water, hoping to track down a friendly boat.

But none ever showed.

Jack had no choice but to return to the island and his crew. But, “the return voyage nearly killed him as strong currents spun him out into Blackett Strait and then back into Ferguson Passage” (Source). Jack was forced stop on Leorava Island, “where he slept long enough to recoup himself for the final leg of the trip” (Source). He had spent roughly 30 of the last 36 hours in the water.

For the next two nights Jack and Ensign George Ross took turns swimming out alone (or sometimes together), trying to spot an American boat.

On August 4, again hauling McMahon, Jack “led the men back into the ocean, striking out for Olasana Island in hopes of finding food and fresh water, but also trying to get closer to Ferguson Passage” (Source). However, they found the island to be a bit of a disappointment. While it may have had more coconuts, the coconuts made the men sick. Additionally, the island had no fresh water.

The next day, Jack and Ross set off for the last island in the chain, Naru Island. Here, they found an abandoned canoe along with Japanese candy and fresh water.

But there wasn’t time to rejoice in their great find, because they also discovered two islanders. They tried to call the men over, but the islanders, frightened by the men’s presence, escaped, paddling away.

That night, Jack was on patrol again in the Ferguson Passage. The next morning, he traveled back to Olasana, this time alone. It was here that he ran into the two natives again, discovering that they had made contact with the rest of his crew. Biuku Gasa and Eroni Kumana, island scouts for the Allies, agreed to go back to Naru with Jack the next morning (Aug 6) and to help him get a message to the Marines.

As Jack was struggling to figure out just how to send a message via these men, Gasa retrieved a coconut and showed him how to scratch out a massage on its husk.

[Below: The coconut message.] Now, after four nights since their ship was sunk, all the PT 109 crew had to do was wait for the rescue ship. Per Jack’s insistence, he and Ross set back out into the Ferguson Passage one last time, despite the heavy seas that impeded their return.

Then, on the morning of August 7, eight islanders appeared on Naru loaded with food for the crew and instructions for Jack. He was to return with them and report to an Allied coastwatcher, Lt. A. Reginald Evans.

Jack and the natives stopped back at Olasana to deliver the food to his crew members, then headed on to Gomu Island, with Jack hidden under a pile of palm fronds to keep him out of sight of any Japanese they might pass.

Late that night, the rescue boats, PT 157 and PT 171, came to pick up Jack. Their prearranged signal had called for four shots. However, Jack’s revolver was down to only three bullets, meaning he had to borrow Reginald Evans’s rifle for the fourth. Unfortunately, Jack hadn’t quite anticipated the rifle’s recoil, “which threw him off balance and dumped him in the water. A soaking wet and thoroughly exasperated Navy lieutenant climbed aboard PT 157” (Source).

It was early in the morning on August 8, that the PT 157 finally arrived to rescue the crew of the PT 109.

But the crew was still asleep.

So, Jack decided to yell for them, “much to the chagrin of his rescuers, who were nervous about the proximity of the Japanese” (Source).

As the rescued men settled on the PT 157, they told their story. The marines were so impressed with their story of survival, that one suggested the situation called for a victory song. And he began to sing:

Everyone joined in, including the natives: “For the Bible tells me so.”

The marine stopped them, shocked. “How do you know that song?”

“Easy,” one of them explained, “Some Christian missionaries came to our island. They taught us that song.”

“Well, that makes the song all that more appropriate!” the marine declared.

And the men continued to sing: “Little ones to Him belong, they are weak but He is strong. . . .”

Alone, later, Jack would weep for the two lives he had lost.

For his courage and his leadership, Jack was awarded the Navy and Marine Corps Medal. For the injuries he had suffered, he received the Purple Heart. Furthermore, his father was able to get ahold of the coconut shell that held the scratchings that led to their rescue. He had it encased in wood and plastic. The coconut paperweight would sit on Jack’s desk for the rest of his life.

But a word about our friend, Jack. See, the last line of his coconut message was left off the quote. Jack was just his nickname. His real name was John.

John, who was saved from the Japanese and rescued, along with his crew, after six days of living off of coconuts. John, who would survive the war – unlike his older brother, Joe, who would die in a plane crash almost exactly a year later – and become a hero of sorts. It’s clear here of the miracle. That God had plans for young Jack Kennedy. God had handpicked him for an important job. A job that, while it would cost him his life and his brother’s life, would save the lives of people, the world over.

It just goes to show how God works in the lives of those he’s handpicked for high duty long before they ever consider that role for themselves. 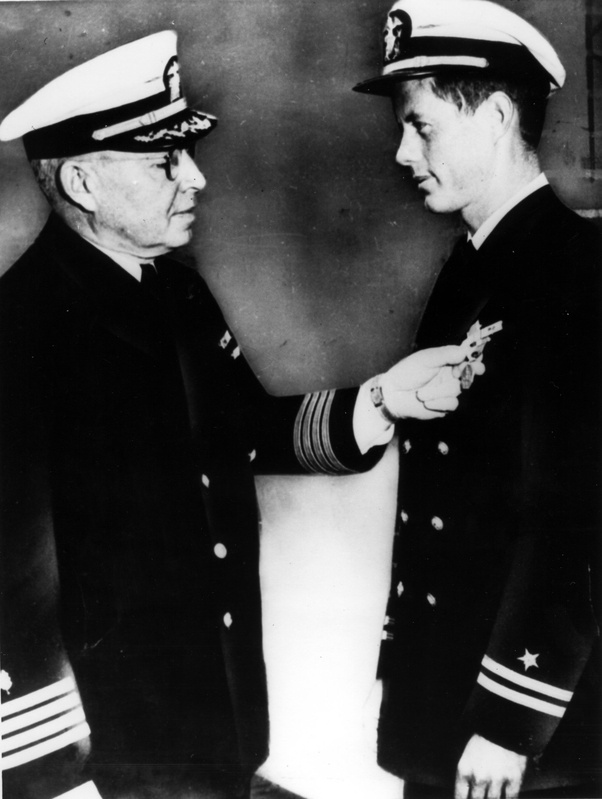