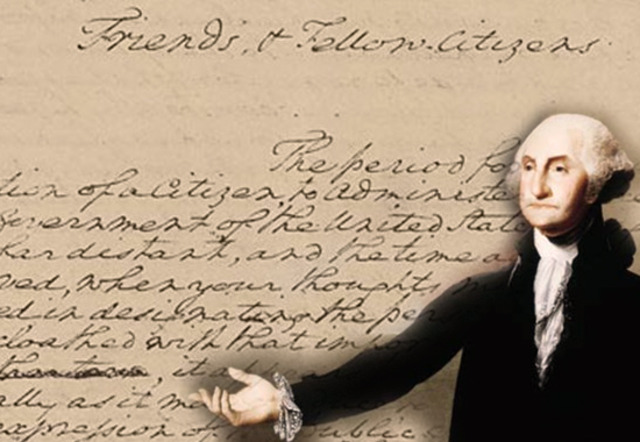 Starting with President Washington, our country has a tradition of presidential warnings in their farewell addresses. Take President Eisenhower’s, for example, which we saw just recently here in our trivia questions. Or President Reagan’s, which I’m sure we’ll see soon enough. Bush, I actually remember his. Johnson, I vaguely remember reading his (or, at least about his). And, ahem, others, I’m sure.

It all started with President Washington, back in 1796, when he decided to not seek a 3rd term, starting a precedent that (thankfully) every following president would follow (except, of course, for Roosevelt, thanks to WWII).

“Interwoven as is the love of liberty with every ligament of your hearts, no recommendation of mine is necessary to fortify or confirm the attachment.

“The unity of government which constitutes you one people is also now dear to you. It is justly so, for it is a main pillar in the edifice of your real independence, the support of your tranquillity at home, your peace abroad, of your safety, of your prosperity, of that very liberty which you so highly prize. But as it is easy to foresee that from different causes and from different quarters much pains will be taken, many artifices employed, to weaken in your minds the conviction of this truth, as this is the point in your political fortress against which the batteries of internal and external enemies will be most constantly and actively (though often covertly and insidiously) directed, it is of infinite moment that you should properly estimate the immense value of your national union to your collective and individual happiness; that you should cherish a cordial, habitual, and immovable attachment to it; accustoming yourselves to think and speak of it as of the palladium of your political safety and prosperity; watching for its preservation with jealous anxiety; discountenancing whatever may suggest even a suspicion that it can in any event be abandoned, and indignantly frowning upon the first dawning of every attempt to alienate any portion of our country from the rest or to enfeeble the sacred ties which now link together the various parts.”

A love of country. That no force – from outside our walls or from within – should dare to tear this country apart. That should make it anything less than the great nation that he and others sacrificed to form.

“The name of American, which belongs to you in your national capacity, must always exalt the just pride of patriotism more than any appellation derived from local discriminations. . . .You have in a common cause fought and triumphed together. The independence and liberty you possess are the work of joint councils and joint efforts, of common dangers, sufferings, and successes.”

“While, then, every part of our country thus feels an immediate and particular interest in union, all the parts combined can not fail to find in the united mass of means and efforts greater strength, greater resource, proportionably greater security from external danger, a less frequent interruption of their peace by foreign nations, and what is of inestimable value, they must derive from union an exemption from those broils and wars between themselves which so frequently afflict neighboring countries not tied together by the same governments, which their own rivalships alone would be sufficient to produce, but which opposite foreign alliances, attachments, and intrigues would stimulate and imbitter.”

He continued to warn that we should never let our differences divid us to the point of waring amongst ourselves. Of course, the Civil War followed, many years later. But that was a war of necessity, for every man was created to live equally in this country. Meaning, each man has the same right to a home, to education, and to a job. No man should be owned by another. But why should we let petty rivalries about different ideologies separate us?

“Respect for its authority, compliance with its laws, acquiescence in its measures, are duties enjoined by the fundamental maxims of true liberty.”

He reminded the people of the importance of obeying all the laws of the government and of minding the Constitution.

“All obstructions to the execution of the laws, all combinations and associations, under whatever plausible character, with the real design to direct, control, counteract, or awe the regular deliberation and action of the constituted authorities, are destructive of this fundamental principle and of fatal tendency. They serve to organize faction; to give it an artificial and extraordinary force; to put in the place of the delegated will of the nation the will of a party, often a small but artful and enterprising minority of the community, and, according to the alternate triumphs of different parties, to snake the public administration the mirror of the ill-concerted and incongruous projects of faction rather than the organ of consistent and wholesome plans, digested by common counsels and modified by mutual interests.

“However combinations or associations of the above description may now and then answer popular ends, they are likely in the course of time and things to become potent engines by which cunning, ambitious, and unprincipled men will be enabled to subvert the power of the people, and to usurp for themselves the reins of government, destroying. afterwards the very engines which have lifted them to unjust dominion.”

Now this is important: He warned of a party that would rewrite the Constitution, paying little heed to the country as a whole, but instead to the wants and desires of the party alone. Maybe more people should pay attention to Washington’s warnings and actually learn the Constitution. Maybe we could have avoided that mistake. He warned us to look out for these people and to not let them have power. For they would thwart it for their own good.

“Of all the dispositions and habits which lead to political prosperity, religion and morality are indispensable supports. In vain would that man claim the tribute of patriotism who should labor to subvert these great pillars of human happiness–these firmest props of the duties of men and citizens. The mere politician, equally with the pious man, ought to respect and to cherish them. A volume could not trace all their connections with private and public felicity. Let it simply be asked, Where is the security for property, for reputation, for life, if the sense of religious obligation desert the oaths which are the instruments of investigation in courts of justice?”

A country that defies the rights of a religious man cannot prosper. Many a man has debated just how religious Washington actually was. The truth is, we can’t make that judgement. What we do know, is that this country was founded on religious principals and Washington (although briefly) notes that the country cannot stand without the pillars of religion.

It is true that other presidents have acknowledged that this country cannot thrive without God at it’s center. It’s also true that other presidents have warned about division from within. Or about someone, someday throwing out the Constitution. Or that ideologies would divide this country to the extent that we would start another civil war. That all started with Washington.

What is also true is that We the People can learn something from these warnings. We should probably pay attention.