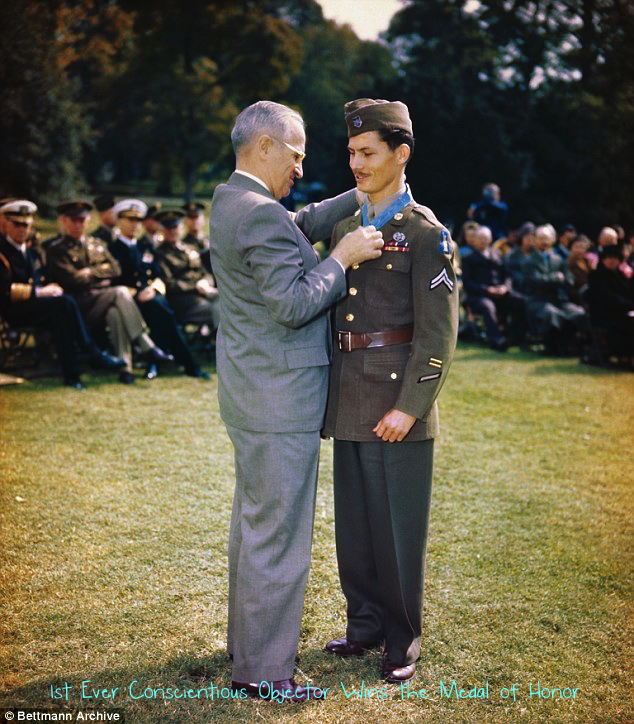 Today in History: October 12, 1945 – 1st Ever Conscientious Objector Wins the Medal of Honor

Today in 1945, was the first time ever that a conscientious objector won the Medal of Honor. Private First Class Desmond T. Doss earned the medal of “outstanding bravery as a medical corpsman” (Source).

During WWII, at the Battle for Okinawa, Doss put his life on the line to save 75 lives. Doss DID NOT carry a weapon into battle due to religious beliefs. When WWII began, he registered with the Medical Corps, wanting to save lives. And save lives he did.

During the battle, the 1st Battalion was assaulted on top of the 400-foot Hacksaw Ridge. The soldiers scaled the cliff, “only to be met by Japanese machine gun fire and flamethrowers” (Source). As others began to retreat, Doss put his own life on the line to lower – one by one – men down from the cliff on self-made rope-supported litter.

Just two weeks later, Doss would again refuse to seek cover until he saw to his ailing comrades. This time, he would be the one needing medical attention. He had been injured in the legs by a grenade. But that did not stop him from helping other injured men. While attending to this patient, Doss was hit again, this time in the arm. “He created a splint out of a rifle stock and crawled 300 yards to the aid station” (Source).

Doss saw it as his opportunity to “serve God and country” (Source).

On October 12, 1945, President Harry Truman awarded him for his heroism:

‘Through his outstanding bravery and unflinching determination in the face of desperately dangerous conditions Pfc. Doss saved the lives of many soldiers,’ his Medal of Honor citation read. ‘His name became a symbol throughout the 77th Infantry Division for outstanding gallantry far above and beyond the call of duty.’

Doss would later be called to the White House for another ceremony, this time by President Kennedy.

To learn more about Desmond Doss’s heroism, check out The Unlikeliest Hero or Redemption at Hacksaw Ridge (which is just the reprinting of the same story).