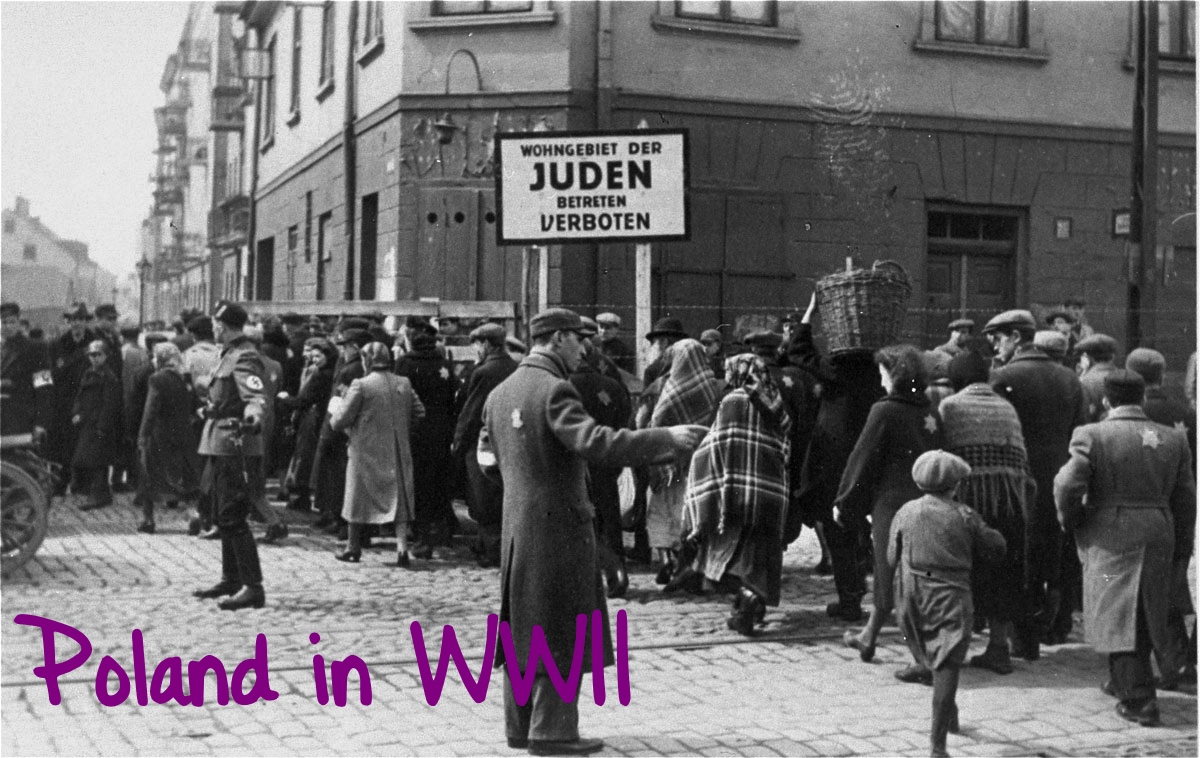 Not sure how I missed such an important entry, but here it is now. As we know, after the Jews, the Polish probably received the worst Nazi brutality – and let’s not forget that for nearly two years, they were also occupied by the Soviets . . . and then again by the Soviets after the war. But more on that later.

You know what the amazing this is, though? Despite this, despite all of this, Poland never was willing to capitulate.

To fully understand Poland during WWII, we need to understand Poland between the two wars. First off, there was the issue of the Treaty of Versailles Marshal Ferdinand Foch (we remember him from WWI) felt very troubled by the treaty. He assumed – correctly – that it would be “An armistice for 20 years” (Source). He couldn’t have been any more correct. Well, except that it was 21 years.

Their second problem was location. They laid between their two biggest enemies. Yup, Germany and Soviet Union. To solve their problem, they signed not one, but two nonaggression pacts. In 1932 with the Soviet Union and in 1934 with Germany. But they most have known that pacts were meaningless. Of course, what followed a mere 5 years later was the German-Soviet Molotov-Ribbentrop Pact, during which time Europe (and Poland, in particular) was divided between the two world-dominating dictators.

See, after the invasion many Polish were able to flee, many of them to France. “The Polish forces fought with the French against the Germans, and then when France surrendered, scrambled to escape yet again, this time to Britain” (Source). While in Britain, many continued to fight with the Allies. In fact, the Polish fighter pilots “were instrumental in helping to save Britain during the most desperate hours of the Battle of Britain in the summer and fall of 1940, and the Polish tank divisions at Normandy that won the hard-fought Battles of Falaise” (Source). Despite occupation, the Polish were instrumental to Allied victory.

After the defeat of France, the Polish did attempt fleeing to Britain, but not everyone escaped. In fact it is estimated that only about 18,000 were able. The rest were either “imprisoned, interned, or demobilized,” which was similar to what those left in Poland were facing (Source).

But, of course, those left in Poland received the worse of it. After all, Poland was the ‘experimental state’ – the state where the Nazis would practice displacing and exterminating the Jewish population. It was in Poland that the practice of sending Jews to ghettos started (remember that concentration camps, or ghettos, had been around since 1933, but were not yet for Jews). Some 145,000 Jews perished between Warsaw and Łódź, though there were as many as 2,000 different camps throughout Poland. The Final Solution itself began in Poland (Operation Reinhard was specific to Jewish Poles). “Already in December 1941 . . . Germans initiated the killing through the use of fumes from truck exhausts” (Source).

Here’s the thing, though, Hitler had similar plans for those of Polish decent. “I have sent my Death’s Head units to the east with the order to kill without mercy men, women, and children of the Polish race or language. Only in such a way shall we win the Lebensraum that we need” (Source). The Polish, he had declared, were an inferior race.

There were any number of reasons that a person could be sent to a prison camp: being part of the resistance; aiding Jews or POWs; dealing on the black market; avoiding work; tardiness; not supplying the Nazis with their ‘share’ of the quota; or, quite simply, the sin of being born Jewish or Polish.

So, one might think that being victims themselves, that the Polish would see no reason to aid those even more unfortunate than themselves. And, in some cases, this was very true – even in the Soviet occupied territories. But, to the credit of the Polish nation, it was not always the case. In fact, there were “several hundred thousand Poles involved in aiding Polish Jews. There are 700 documented instances of Poles paying the highest price for aiding Jews” (Source). While there were some that were blackmailing Jews, denouncing Jews, or reporting Poles who hid Jews, there were those – namely involved with the Polish Government in Exile – who handed out death sentences to Poles who blackmailed Jews.

[Below: German occupation of Poland] 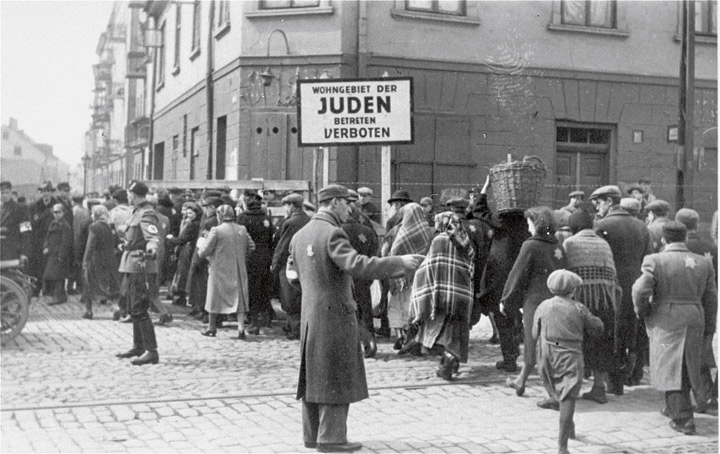 And all while fearing that one might slip up and end up in a ghetto, Polish daily lives under the occupation of two dictators were filled with the same rules and regulations of any other occupied country at the time. The Polish, Germany had decided, were really not good for anything but forced labor. Ahem, forced labor and a source of food.

It was quite simple, really. For the Polish to work for their occupiers. Then, to ensure that all the food would go to their occupiers, the Poles were starved. “For example, in 1941, the daily wage of a laborer in Warsaw allowed for the purchase of 40 decagrams of bread on the black market” (Source). Now, using the black market was illegal and punishable by, well, by being sent to a concentration camp. But since the Germans (and the Soviets) were taking all their food and they weren’t exactly being paid for their work, the Polish didn’t have much of a choice. Well, except to rob the German factories were they were employed or start their own illegal businesses. Both of which they did.

There were some 400,000 POWS captured during the September Campaign of 1939. They were made into “laborers.” Throughout the entire war, some 2.8-3 million Poles served as forced laborers. Often, these laborers lived on the territory of the factory – and even those in the camps were usually sent into town to work in the local factory. Essentially, there wasn’t much of a difference between the two. Both groups were starving and both lived in squalor. To make their lives even more abysmal, these were the same factories that the Allies were busy bombing. So, if you weren’t killed by the hands of the Germans, you risked the chance of being killed by the Allies.

In the country, life as a forced laborer wasn’t much better. Out here, many of them worked as farm hands. But it was pretty much luck of the draw. If you were lucky, the family you were working for might treat you like a member of the family. But more likely than not, you were treated as subhuman.

But that bears the question of Soviet-Polish relations during this occupation. And that’s not often discussed. In June of 1941, Germany invaded the Soviet Union, which meant that the Polish now only had one enemy, not two. That the Soviets were now a Polish “ally.” But on July 30, 1941, Winston Churchill forced General Wladylsaw Sikorski to sign the Sikorski-Maisky Pact. This pact “enabled the reestablishment of diplomatic relations and the establishment of a Polish Army in the USSR” (Source). It did not deal, however, with Poland’s Eastern border. Nor did it deal with the several thousand missing Polish officers, all of whom were interned by the Soviet Union. Why was this? Probably because the NKVD had murdered all of these officers back in 1940.

During the remaining years of the war, though, Stalin was quietly planning his, well, re-occupation of Poland. And the Poles were beginning to suspect what was the in the works. More about that will be discussed as we come to posts about 1945, but it is important to keep Soviet offenses in mind.

Between the two occupiers, Poland lost as much as 40% of all intellectuals – some of them even operated on, such as the women at Ravensbrück. Hitler could control Germany through forced labor and the fear of concentration camps, but that was made even easier if he got rid of all the elites: intellectuals, priests and other religious leaders, political and social workers, officers, policemen, entrepreneurs, civil servants, landowners, and others. Besides, now that Germany owned Poland, Nazi officers would take the place of these Polish officials. On November 6, 1939, “183 professors of Jagiellonian University and AGH University of Science and Technology arrested and sent to their death in Sachsenhausen” (Source). Between May and June of 1940, another 3,500 Polish elites were arrested and murdered. Still more were sent to Auschwitz. And, of course, it grew even worse under Soviet occupation.

Those who managed to avoid arrest lost all means of employment, meaning that in many cases, they were supported by the underground. Those living in the Soviet sector prior to 1941, faced the horror of deportation – being forced from one’s home with no place to go – instead. “By the Spring of 1941, at least 840,000 people were brutally uprooted from their homes and stripped of all their possessions” (Source). During the journeys, the Soviets treated the deportees inhumanely and harshly. As a result, many did not survive.

After Germany defeated the Soviet Union, Germany planned to resettle still more Poles. In fact, between November 1942 and August 1943, 300 Polish villages with some 110,000 Poles were displaced. Still more were displaced after the Warsaw Uprising of 1944 when the land shifted and it was no longer considered Polish territory.

[Below: Churchill reviewing the Polish troops] 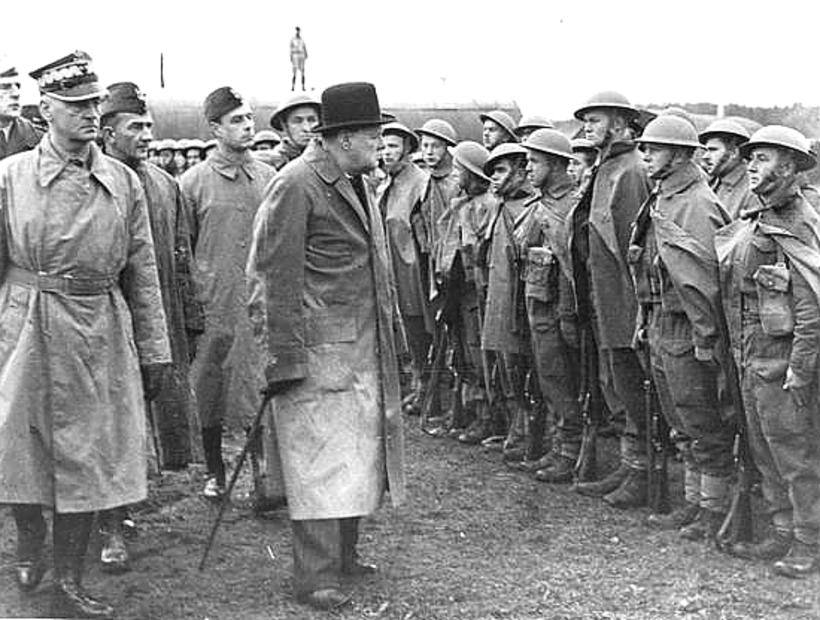