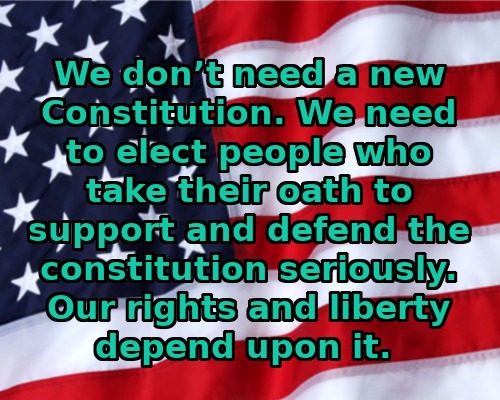 Between my dad, brother, and myself, we have over 50 years of service in uniform. We all took an oath to defend the Constitution and follow orders including those from the Commander and Chief. That is much like a stool with 3 legs. Those legs include myself (anyone who took that oath), the President, and the Constitution. Remove any of those and everything falls.

The last thing I want to see is those 50 years add up to nothing. Not to mention the millions who took that oath. Every elected official takes a similar oath. That oath creates a brotherhood that begins in training, extends into service, then extends to everyone who has taken that oath.

My dad was in charge of the mechanics committee in the 84th Division in Milwaukee. My brother and I had the honor of serving under him. About every few months he would give his regular speech reminding us about the 1st Amendment, the freedom of speech we put that uniform on to defend. We may not agree with everyone, but no matter how much we may disagree, our service defends their right to have and share their view. Today there are thousands of videos on the Internet showing my dad was not the only person preaching about our freedom of speech.

We all served to guarantee freedom of speech. The second Amendment was a given and never discussed. What we never considered was a threat to our voting rights. Not until 2020. Our responsibility to vote has been threatened. Our right to vote has been stolen.

Hundreds of people have followed laws by reporting election crimes to the proper authorities. Those people identified crimes and those responsible in courtrooms and legislature hearings. To date I have not seen a any charge filed against a single person responsible for interfering with the 2020 election. What good is a system to report crimes that carries no investigation or penalties?

Are legislators and judges afraid of public backlash? Only a small minority of people stand against the Constitution and voter rights. As for the media, their backlash and threats are growing cold. The vast majority of people are tired of violence in the streets. If it wasn’t for paid protesters, few would have taken to the streets in 2020. Rioters and looters are paid mercenaries with no political views and no loyalty. Remove those paid rioters and all those protests would have remained peaceful. Paid rioters accounted for less than 1% of those who wanted their voices heard. People are leaving the social media giants in droves. Factions within the left have been at war with one another since the election drawing themselves into smaller and smaller splinter groups. Left to their own they have separated into warring factions and lost what power they imagined they had. This is history repeating. As Vice President Joe Biden engineered a government in Ukraine that included representatives from all factions, those seeking a democracy, a republic, communists, socialists, and Nazis. Biden thought he was smart enough and tough enough to force all those factions to work together. History shows us Ukraine hosted a revolutionary war in 2015 to over throw the government Biden played a key role in organizing. When we look at the cabinet Biden is forming today, we see Biden following the same plan he initiated in Ukraine. Biden is putting together a second attempt at gathering a number of radical factions which he will once again attempt to control. We cannot allow such an experiment in the US government to appease the goals of one self centered person attempting to cement his name in history.

The US needs people to stand up to corruption and take the lead in bringing people to justice who blatantly and knowingly have broken election laws. The US needs individuals to stand up against news and social media giants. Media factions may have funds, but their followers lack loyalty. The vast majority of people visiting news and social media websites demand voting transparency. That includes Democrats, Republicans, and Independent voters, all unified in the quest to uncover the truth. Those opposing the Constitution and voting laws like all criminal actions are a small minority.

At the very least legislators have to identify illegal votes including those cast by deceased voters, multiple votes by the same voter, and votes cast by non-residents and correct those numbers. Legislators have to investigate claims of voter steering in nursing homes and at the polls. Any backlash from those investigations and corrections to the vote totals will erode the little support news and social media has left after the election. The tide will turn and the backlash will fall upon fake news and social media that has been censoring the American public that has grown weary of those controls.

It will not be easy but legislators need to look at the hard drive image of voting machines in question. The report on voting machines tells nothing. Hand picked voting machines were examined by the same people who most likely committed voter fraud and did nothing more than provide them with the opportunity to present shallow evidence to over shadow the questions at hand. It does no good at all to feed the same ballots through the same machines and expect a different result. Allowing the election commission to hand pick those machines is as useful as police asking a criminal to supply whatever gun they want to conduct ballistics tests. Of course the criminal will do whatever they can to hide evidence. Those on the election commission know which machines were used to count ballots that surfaced after the election and have more than adequate time to wipe evidence from those hard drives. Examining hard drives will show when programs were added, tested, modified, and deleted in attempts to cover up any crime. It will also show exactly when ballots were scanned and how they were counted or manipulated.

As of today we have conflicting reports between states. In Arizona election commission officials claim they have no read or write privileges to Dominion voting machines. In Michigan Dominion testified, the end user has the ability to alter the program. Dominion also explained how switching cards on the voting machines can alter votes during and after the election. In Michigan, Dominion also testified their machines were never programmed to read any of the mail in ballots. Which means they had to be read by hand. Which raises more questions. Were the machines in Wisconsin programmed to read mail in ballots? Where and how were those ballots counted? What has been done to ensure no one voted mail in and at the polls? Is the state legislature going to continue to have the election commission investigate themselves after hearing testimony from a number of people filing complaints to expose voter fraud on election day and days following the election? At the present time it appears the criminal in voter fraud is also the investigator, prosecutor, defense, and judge.

I’ve watched the majority of the state legislation hearings. After viewing that hearing I noticed one thing missing. The hearing was filled with people who signed sworn affidavits and provided testimony of laws broken and ignored. That was a hearing open to the public. How many democrats were willing to sign a sworn affidavit stating all election laws were followed and the 2020 was a fair, untainted election? A hearing has to look at both sides. If a business faces charges from OSHA, the business licensed in Wisconsin has no choice but to provide evidence in a court of law showing their plan to follow OSHA regulations. Our election process is at least as important as any OSHA safety regulation. Not only does the election commission need to prove they are aware of the laws they are to follow, they have to provide evidence of their training, and the execution of those regulations. What are plans for the state legislation to deal with the regulations that were ignored or locally modified? I’ve experienced voter discrimination first hand in 2016. Back then I considered it an isolated incident. 2020 shows us election discrimination is wide spread and organized. People are being trained to excel in voter discrimination.

When we see the same tactics used from precinct to precinct, city to city, and state to state, we have evidence of a planned coup that needs investigation at the highest levels. The tactics used to control the vote in 2020 were planned in advance. Information was shared nation wide. People were behind those plans. People who feel safe because they have been told, “no one ever faces charges for voter fraud.” Where are the charges? Where are the arrests? Why is every law enforcement agency ignoring the evidence supplied by individuals nation wide? When is someone going to take action?

The big question is, how to correct the 2020 vote results? Since there is no precedence, I am glad I am not in your shoes. No matter what the decision, there will be a backlash. If the count is over turned in steps, such as removing dead votes, double votes, and other illegal votes, the waters can be tested for reaction. That video on the hearing also contained good news. Democrats and Republicans are coming together. At least a few Democrats are ignoring party lines to stand up with the Constitution and laws of the land. Not to mention future integrity of elections. Needless to say, any steps in correcting the 2020 vote have to show unquestionable evidence. Special care has to be taken to ensure a Pandora box is not opened and misused by future generations. But something needs to be done. Something concrete that cannot be manipulated to turn future elections into something worse. The Supreme Court was right in their decision to turn the problem back to the states where actions need to be taken. The safe way out is to allow the election results to stand and work on tighter laws to secure future elections such as full time surveillance, and laws on the mail in voting allowed for people restricted to home due to medical conditions such as a doctor’s excuse and medial records. But can we afford the safe route? What will happen if the Wisconsin legislature examines votes on a case by case basis and makes the final decision on those votes and changes election results? Millions of people consider that an easy task. Others look at that as an end to democracy. Personally I look at changing the vote results as a signal to future attempts to manipulate elections. If nothing is done, the results could be compared to removing every speed limit sign in the state. At first the majority of people will continue to drive safe. A small minority will take that as a signal to drive full speed where ever they go, endangering everyone on the road. In a short time more and more people will follow suit and soon chaos will rule the streets. To do nothing will open the door to election chaos, a portion of the plan that allowed a handful of cities to corrupt the vote. No action is a clear sign to those who participated in voter fraud that nothing will ever be done. They are free to operate outside the law with no threat of criminal prosecution. We cannot live with that. Passing new laws will have no effect until those in place are enforced.