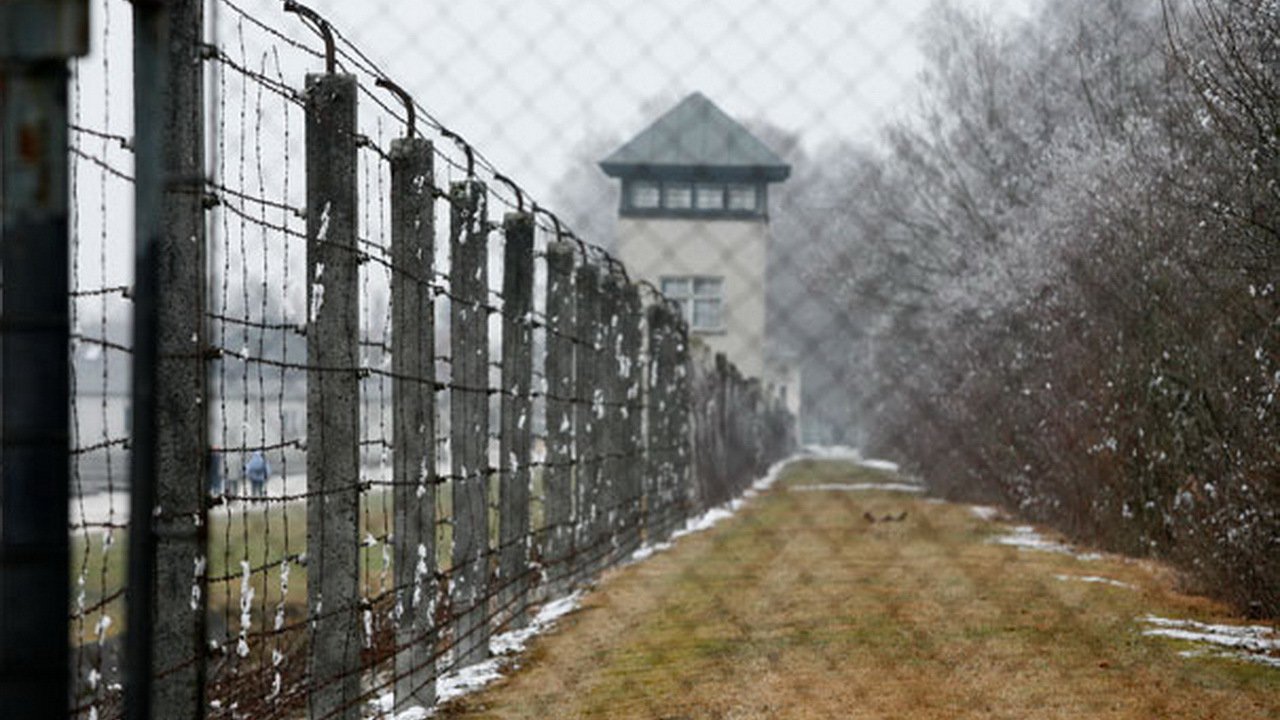 Dachau Concentration Camp was the first Nazi concentration camp. It opened its gates on March 22, 1933, just two short months after Hitler came to power as German chancellor and just one month after the famous Reichstag Fire. It opened the day before the Enabling Act was passed. Hilmar Wäckerle was the first commandant.

Dachau is located in Southern Germany, just outside of Munich. It was an old, abandoned munitions factory – which was perfect since Nazis loved to disguise their camps to avoid prying from outsiders. Dachau was divided into two sections: The main camp and the crematoria area. The main camp contained 32 barracks, plus one barrack for imprisoned clergymen and another barrack to be used for medical experiments. Also in the main camp was the gatehouse located by the main gates, as well as buildings for the kitchen, laundry, showers, workshops, and bunkers. Executions took place in the courtyard between the kitchen and the bunker. The perimeter of the camp was fortified by an “electric barbed-wire fence,” a water-filled ditch, and seven guard towers (Source). Dachau had its own unique feature: a museum “containing plaster-images of prisoners marked by bodily defects or other strange characteristics” (Source).

Because of the timing, it was easy to see why Dachau’s original prisoners were political prisoners – mostly Communists, Socialist, and Unionists. Throughout its history, Dachau prisoners would also include not only Jews and those who opposed Hitler’s ideologies, but also “members of any group considered by Hitler to be ill-equipped to reside in new Germany” (Source). This included: artists, intellectuals and other independent thinkers, Jehovah’s Witnesses, and Catholics. Also included were: Gypsies, criminals, the physically and mentally handicapped, and anyone else considered racially or physically impure – including Polish, Soviets, and Austrians. “Between 1941 and 1944, several thousand sick and handicapped Dachau prisoners were sent to a Nazi ‘euthanasia’ center in Hartheim, Austria, where they were put to death by exposure to lethal gas” (Source).

Dachau was mainly used as a camp for political prisoners, and Jews were hardly among the first to be housed there. In fact, “during the early years, relatively few Jews were interned in Dachau, and then usually because they belonged to one of the above groups or had completed prison sentences after being convicted for violating the Nuremberg Laws of 1935” (Source). After Kristallnacht, some 11,000 Jews were imprisoned in Dachau. Most of the Jewish men were released after only a few months and with promises to emigrate from Germany. Then, with the start of WWII in 1939, Dachau’s prisoners were relocated to Buchenwald, Mauthausen, and Flossenbuerg so that the camp could be used as a Waffen-SS site. By early 1940, the camp was again being used to hold prisoners.

Dachau was also a forced labor camp, and in 1937, labor was used to destroy the old munitions factory and then rebuild the camp. Work was completed in August 1938 – a little over a year before war broke out. After the camp was rebuilt, forced labor would include building roads, working gravel pits, and draining marshes, as well as being employed in “small handcraft industries established in the camp” (Source).

[Below: Entrance to Dachau]

“Detainees were subjected to harsh treatment” (Source). Only three days into its operation, a perfect example of this “harshness” arose. On the 25th, a former schoolteacher by the name of Sebastian Nefzger was beaten to death. While SS administration claimed he had committed suicide, the official autopsy showed that he had actually likely lost his life to asphyxiation or strangulation. “The Munich public prosecutor summarily indicted Wäckerle and his underlings on a murder charge. The prosecutor was immediately overruled by Hitler, who issued an edict stating that Dachau and all other concentration camps were not to be subjected to German law as it applied to German citizens. SS administrators alone would run the camps and hand out punishment as they saw fit” (Source).

Wäckerle was quickly replaced with a new commandant in June, Theodor Eicke. Immediately, regulations were put in place: All rule-breaking was punishable by beatings, and anyone who attempted to escape or express political views differing from Hitler’s was executed on the spot. This blueprint would serve all future concentration camps.

While thousands of prisoners were executed, thousands more died of overwork, malnutrition, and disease. Then in 1942, construction began on Barrack X – Dachau’s crematorium. Here, four ovens were used to incinerate thousands of corpses. But, while the crematoria did have a gas chamber, “there is no credible evidence that the gas chamber in Barrack X was used to murder human beings. Instead, prisoners underwent ‘selection’; those who were judged too sick or weak to continue working were sent to the Hartheim ‘euthanasia’ killing center near Linz, Austria. Several thousand Dachau prisoners were murdered at Hartheim” (Source). Instead, the SS used the firing range and the gallows.

On top of executions, Dachau prisoners were subjected to brutal medical experiments. While other camps specialized in experiments dealing with bullet wounds, Dachau specialized in learning how to revive “individuals immersed in freezing water” (Source). Thus, prisoners were immersed for hours at a time in tanks filled with ice water. Roughly 400 prisoners underwent this experimentation and between 80-90 died during the process.

As Allied forces began to march towards Germany, more and more prisoners arrived from other camps. “Transports from the evacuated camps arrived continuously at Dachau” (Source). Typhus became a serious problem.

April 26, 1945: American troops were approaching, yet, some 67,665 prisoners were still living at Dachau and its sub-camps, more than half of them at Dachau main camp – with some 22,100 Jews, another 43,350 political prisoners, and many other groups. On the 26th, 7,000 prisoners were forced on a six-day long march to Tegernsee. Anyone who could not continue was shot, and many more died of cold, hunger, and exhuastion.

On April 29, Dachau was liberated by Lt. Col. Felix L. Sparks, leading the 3rd Battalion, 157th Infantry Regiment, 45th Infantry Division. At the same time, Brig. Gen. Henning Linden, leading the 222nd Infantry Regiment of the 42nd Infantry Division accepted the formal surrender of Lt. Heinrich Wicker. On their way to the camp, the Allied troops “found more than 30 railroad cars filled with bodies brought to Dachau, all in an advanced state of decomposition” (Source). On May 2nd, those who were sent on the death march were subsequently liberated.

[Below: Prisoners being liberated]