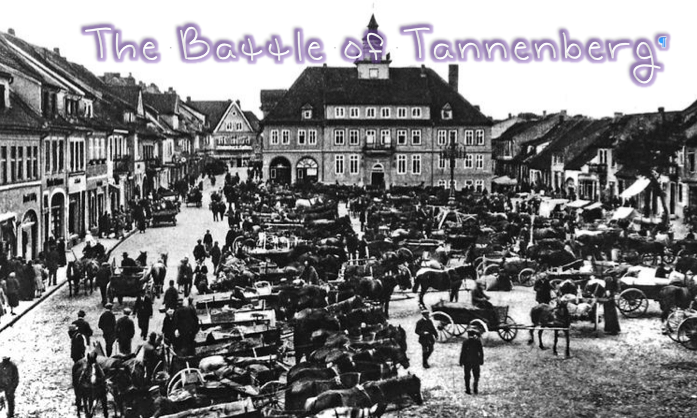 The Battle of Tannenberg

On August 26, 1914, the Battle of Tannenberg began in East Prussia in the city of Allenstein – the first battle of WWI to take place on the Eastern Front. The German 8th Army, commanded by Generals Paul von Hindenburg and Erich Ludendorff, encircled the Russian 2nd and 1st Armies, under the command of Generals Aleksandr Samsonov and P.K. Rennenkampf, respectively.

Previously, Russia had entered into German territory by splitting up. Gen. Samsonov led the 2nd Army around the Southwestern corner of Prussia, while Gen. Rennenkampf led the 1st Army into Northeast Prussia. Their plan was to join forces again in an attack against General Prittwitz’s 8th Germany army. According to their intel, the bulk of Germany’s armies were currently busy fighting in France; the two Russian armies should have no trouble taking out the outnumbered German army.

But, it was a minor Russian victory at the Battle of Gumbinnen six days earlier, that was Rennenkampf’s undoing.

After his victory, Rennenkampf decided to take a moment to regroup his troops. Meanwhile, unbeknownst to him, The German chief of general staff, Helmuth von Moltke, had replaced the commanders of the 8th army with two generals of some stature.

And now, the Russian generals were “separated by the great Masurian Lakes” with no effective way to “communicate with each other as to their movements” (Source). And, the Germans were planning a phenomenal attack, prepared by Colonel Maximilian Hoffman.

His plan was, firstly, to confuse Gen. Rennenkampf by sending cavalry troops “as a screen to Vistula” (Source). Then, he would send Gen. Hermann von Francois’s I Corps to Southwest Prussia to head off General Samsonov on his left wing, while two more corps would move into the right. Finally, a fourth corps would wait in Vistula to meet Gen. Samsonov head on.

Admittedly, “Ludendorff succumbed to his nerves initially, delaying the start of the German attack by one day,” (Source). But, then, on the 26th, Hoffman was given two intelligence reports. They gave him everything he needed to know. Most importantly, that the Germans need not fear a combined attack from the Russians.

It was with this information that “the Germans were able to take Samsonov’s army by surprise with the force of their attack near the village of Tannenberg” (Source).

The one day delay on the German side had allowed Samsonov’s army enough time to advance deeply into the German lines. But he underestimated the true strength of the German armies. Samsonov’s own armies had been overstrung; in great need of food and sleep.

This worked out to the German’s advantage. The Russian 1st Army, under Samsonov, had “blundered into an ambush” (Source). They were surrounded by Germans.

“After three days of battering by German artillery, Samsonov’s troops began their retreat; more German forces cut off their path and a massive slaughter ensued” (Source).

In all, some 92,000 Russians were captured at Tannenberg and another 50,000 were killed. Only about 10,000 of Samsonov’s men were able to escape. The Germans, meanwhile, “suffered fewer than 20,000 casualties and, in addition to prisoners, captured over 500 guns. Sixty trains were required to transport captured equipment to Germany” (Source).

Humiliated about reporting the disaster to the Russian Tsar, Nicholas II, Samsonov shot himself in the forest. His body was found by German search parties and he was given a military burial.