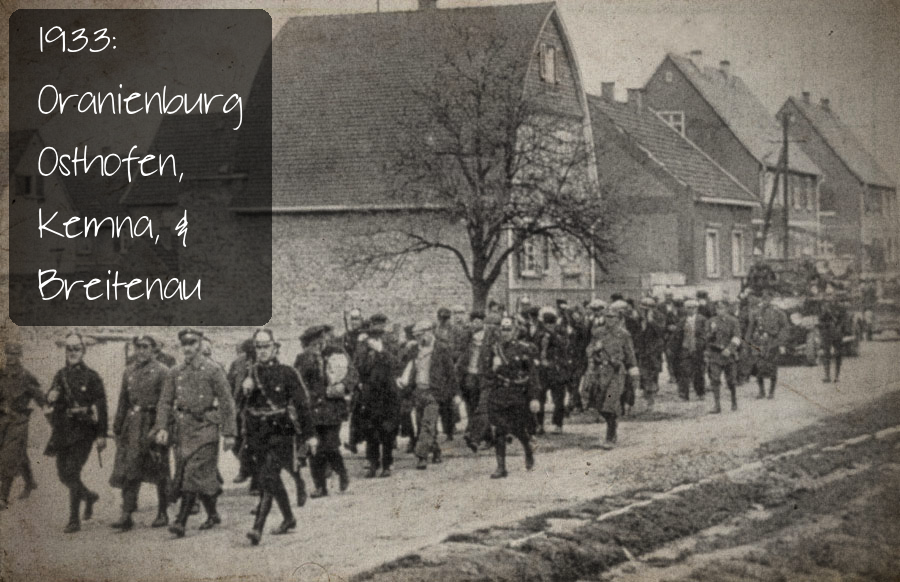 After Hitler came to power in 1933, one of his earliest acts was to round up anyone who didn’t agree with him politically – namely Communists and Socialists. Later came Jews, Poles, Christians, and others. The following four camps opened up in 1933. Though not as well-known as camps such as Dachau, which opened up in the same year, it’s just as important to remember their existence and the atrocities that took place in them.

Oranienburg Concentration Camp was established in Oranienburg, Germany (actually Prussia). “The first inmates were 40 prisoners who were dragged to the small town 20 kilometers (12.4 miles) north of Berlin on the evening of March 21, 1933” (Source). Remember that Hitler took power in January of 1933 (and in America, Roosevelt in March of 1933).

Established in a disused factory (likely a brewery), Oranienburg’s first occupants were mostly political opponents (aka Socialists and Communists) – much like Dachau. As of September of 1933, Oranienburg had two subcamps: One at Elisenau Manor near Bernau, and another in Börnicke.

Then, after the Night of Long Knives (Jun 30, 1934), the SS took over the running of the camp from the SA, without the notification the responsible authorities in Berlin.

Days later, on July 4, SA Standartenführer Werner Schulze-Wechsungen shifted the control of the camp to Potsdam (the site of the Truman, Churchill, etc conference in ’45), meaning the guards were officially being paid by tax money! In fact, between August of 1933 and July of 1934, Germans paid 280,000 Reichmark to the camp in taxes.

Oranienburg was never intended to be a death camp, merely a prison camp. Though, they were victims of “mistreatment, torture, and lack of medical care” (Source). Prisoners did labor (forced, of course) in the town of Oranienburg.

The camp closed its doors in 1936 when Sachsenhausen Concentration Camp was established in the same town.

Oranienburg saw some 3,000 prisoners during its run and 16 deaths.

[Below: Rudolf Diels reviewing prisoners at Oranienburg in December ‘33]

After the Reichstag Fire, Nazis blamed the Communists. Thus, thousands of Communists were rounded up by the Gestapo. In March of 1933, they became the first prisoners at Osthofen Concentration Camp. Located near Worms, Osthofen was established in a derelict paper mill. Later, Socialists and Jews and other religious people joined the Communists as prisoners.

Until that Autumn, the camp was under the control of the SA. However, then the camp was taken over by the SS. Though not a death camp, the prisoners were treated brutally. For example, in Camp I, “the men were accommodated in large, unheated, cold, and damp factory buildings” (Source). While there, they were forced to build their own furnishings. This included a fireplace to keep the place warm. But this was nothing compared to those incarcerated in Camp II. For one, those in camp I could receive both visitors and parcels – pretty generous for Nazi camps.

At the second camp, however, the prisoners were not doing forced labor in camp, but in the town itself. Prisoners (probably at both camps) were regularly abused, and suffered from disease and lack of hygienic conditions. Of course, that was normal for these camps.

Unlike some of the more well-remembered camps, stays at Osthofen were not permanent. In fact, the average stay was from 4-6 weeks. On rare occasions, it lasted to about a year. Even once prisoners were released, however, the Gestapo kept tabs on them.

In May of 1934, when German camps were reorganized, Osthofen was permanently closed. It was decided that it was no long useful. Duing this time, a “there were 3,000 internees imprisoned” in Osthofen” (Source). There were no deaths. Kemna Concentration Camp was opened in 1933, after Hitler took supreme power. Located along the Wupper River in Wuppertal, Germany, Kemna was established in an abandoned factory. The initial were inmates were Communists, and then later Socialists, Christians, and trade unionists.

Although the camp was run by the SA, most of the guards came from the same towns as the prisoners, thus many knew each other. Maybe it was because of this that their crimes were not covered up as long as at other camps. “Torture was practiced and the screams of the men were audible to people living and working nearby, and severely injured men were taken to nearby hospitals, all causing word of the camp’s misdeeds to spread quickly” (Source).

Then, in October of ’33, the camp had a “major release” of its prisoners. However, all released prisoners had to sign a document “promising to keep secret all they had seen and experienced at the camp, and were threatened with re-arrest if they disobeyed. The Nazis wanted the public to become familiar with the term ‘concentration camp’ and regard it with dread, but worried that excesses at Kemna and other early concentration camps would turn the public against them” (Source).

Meanwhile, word got out about the SA brutality and an investigation took place. However, the crimes were never prosecuted. Because of this, the camp was forced to close in January 1934.

It is estimated that the camp saw anywhere from 2,500 to 5,000 prisoners. There is no report of any prisoners being killed, but based off of the reports of torture, it’s possible there may have been some.

Breitenau “Protective Custody Camp” was established officially in 1933. However, a year earlier, the Nazis “established a correctional facility in the Benedictine monastery of Gluxhagen” (Source). Then, after they came to power, they added the concentration camp to the mix. Most of the initial prisoners were political prisoners. Most of them had been arrested during “Beggars Week.”

Initially, the camp was run by the local police force, but gradually, the SS took over control. There is no word about deaths at Breitenau, however, it is known that prisoners were badly abused by the guards. The prisoners worked in town, most of them at a mat factory.

Then, the camp was closed in March of 1934. It had seen about 470 prisoners. Most of the prisoners were simply transferred to others camps, not let go, as those staying in Kemna.

After the war began, the Gestapo took over the camp once more, this time as a labor camp. “The men and women had been arrested for having committed deeds such as: leaving their workplace without permission, sabotage, or refusing to work” (Source). According to the Nazis, they were reeducating these prisoners during their 1-2 month stay. Also present in the camp, though, were Jews.

From 1940-1945, Breitenau saw some 8,300 prisoners, about 7,000 of those forced laborers. The rest were likely Jews, Jehovah’s Witnesses, or other Christians. Most ranged in age from 17-25. Of these 8,300 prisoners, it is believed that the Gestapo shout at least 28 prisoners, very likely in March of 1945, when they received word of US Army arrival.