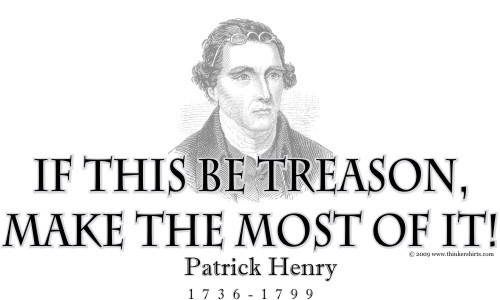 “If This Be Treason, Make the Most of It!”

In the midst of the uproar over the Stamp Act, Patrick Henry, newly elected to the House of Burgesses, decided to offer up seven resolutions to the Stamp Act.

After a heated debate within the House, all seven of Henry’s resolutions were passed by the Congress on May 30, 1765. It didn’t take long for all of these resolutions to also appear in the colonial newspapers.

By the time the vote had moved to the House, the resolutions were already considered official. Back at the House of Burgesses, however, only a mere 39 of the 115 members were actually present. “The older, more conservative members opposed Henry’s resolutions on the grounds that the action taken the previous year by the House of Burgesses sufficiently responded to the Stamp Act, especially in light of the fact that Parliament had yet to answer those earlier resolutions” (Source). But younger members, such as Henry, argued that immediate action was necessary, given that the taxes would be required within months.

By the end of the 30th, five out of the seven amendments had been passed – by very narrow margins. During the debates over the 5th, Henry stood up to speak out in support of his fifth resolution:

“Caesar had his Brutus — Charles the first, his Cromwell — and George the third — ” (“Treason,” cried the Speaker — “treason, treason,” echoed from every part of the House. — It was one of those trying moments which is decisive of character. — Henry faltered not an instant; but rising to a loftier attitude, and fixing on the Speaker an eye of the most determined fire, he finished his sentence with the firmest emphasis) “may profit by their example. If this be treason, make the most of it” (Source).

Unfortunately, there is not actually any record of this speech. In 1817, when William Wirt was attempting to write an account of the famous speech, he had to rely on accounts from Thomas Jefferson, John Tyler, and Paul Carrington.

Many problems arise with this though. For example, Carrington was not actually a witness. He’d yet to take his seat. Jefferson and Tyler were both outside the chamber of the House of Burgesses. They claimed to “remember the cry of treason, the pause of Mr. Henry at the time of George III, and the presence of mind with which he closed the sentence and baffled the charge vociferated” (Source).

Despite none of these men having actually witnessed the speech, they were also all men of “untainted reputation;” they had no reason to lie about Patrick Henry, nor anything to gain from such lies. (Source). So, we do not have a real account of what was said. What we do know, though, is that after Henry retook his seat, another vote was taken. Five of the seven resolutions passed.

Until the following day, when the Congress reconsidered their options and decided to throw out the fifth, after all. Only four of his resolutions had passed. But these four resolutions spread quickly, and were even adapted by other colonies.