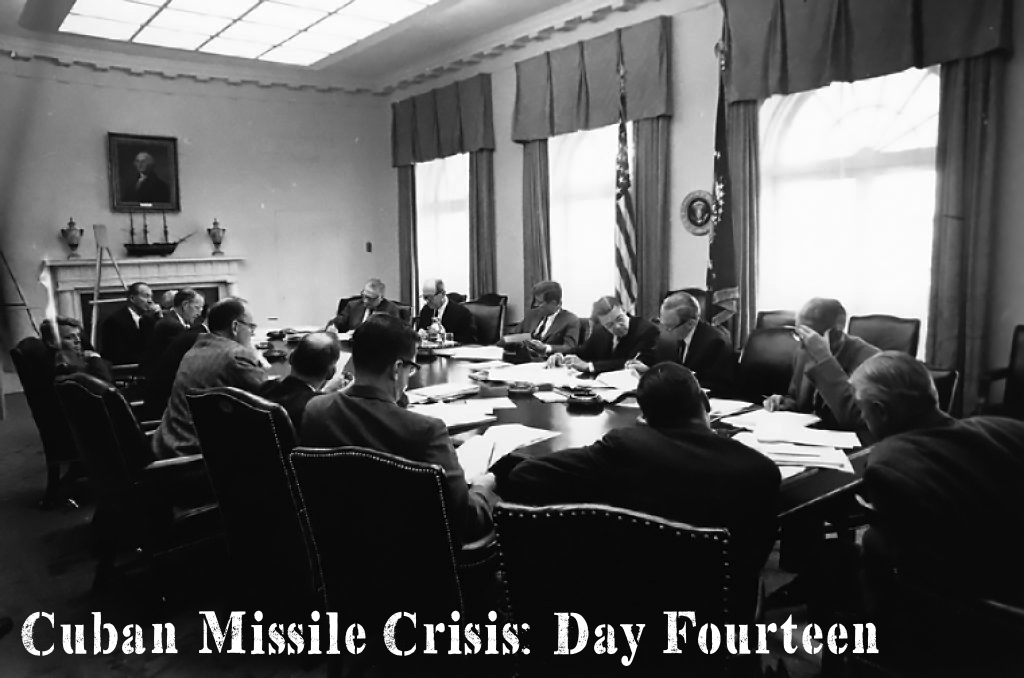 But you didn’t see this post coming, did you? Because everyone knows that the crisis only lasted for thirteen days. After all, there is a book and a movie that tell us so.

October 29th also saw Ambassador Dobrynin deliver a letter to Attorney General Kennedy. “The next day, Robert Kennedy called in Dobrynin and gave the letter back, refusing to accept it. Robert Kennedy’s handwritten notes for this meeting say: ‘No quid pro quo as I told you. The letter makes it appear that there was.’ The missiles would leave Turkey; ‘you have my word on that & this is sufficient . . .  ; if you should publish any document indicating a deal then it is off.’” Dobrynin promised nothing would be published. But, then again, as Kennedy reminded him, he’d also promised that the Soviet Union would never put missiles on Cuba.

And, as President Kennedy’s brother points out in Thirteen Days (published posthumously, by the way), there was still the problem of the Cold War. That was far from over.

“Exasperation over our struggle in Vietnam,” he wrote at the closing of his penultimate chapter, where he reviewed the thoughts and emotions of the past thirteen days, “should not close our eyes to the fact that we could have other missile crisis in the future–different kinds, no doubt, and under different circumstances. But if we are to be successful then, if we are going to preserve our own national security, we will need friends, we will need supporters, we will need countries that believe and respect us and will follow our leadership” (94).

He did point out, however, that they’d all learned something from this horrifying experience. And that, too, could be taken into the next crisis.

Back to the Cuban Missile Crisis, though. Kennedy was finally able to announce that the issue had been resolved on November 20, 1962. Almost a month later. it had taken many more letters back and forth between him and Khrushchev. But it had been worked out.

“The IL-28s would come out of Cuba within 30 days. Though there would be no UN inspection, US forces would be allowed to observe departing Soviet ships. Their cargos of departing missiles would be on deck and could be observed by passing US ships or aircraft. The United States would keep flying reconnaissance planes over Cuba. When the offensive weapons were gone, the quarantine would finally be lifted. The US forces would return to normal peacetime deployments and readiness levels. The Strategic Air Command would stand down its airborne alert” (May 412-413).

May, Ernest R, and Philip D Zelikow, editors. The Kennedy Tapes: Inside the White House During the Cuban Missile Crisis. New York: Norton, 2002.