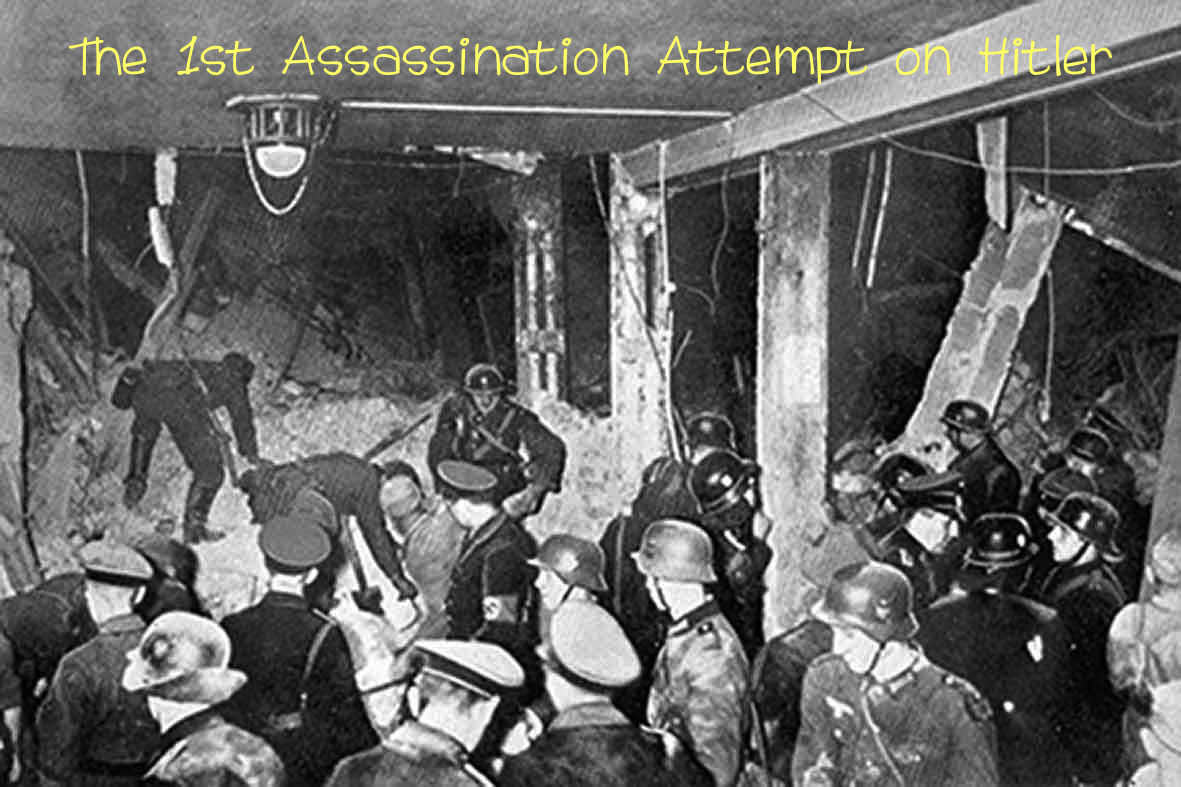 The 1st Assassination Attempt on Hitler

On the 16th anniversary of the Beer Hall Putsh, Hitler made a special speech to the Old Guard Party members. Twelve minutes after his departure, a bomb went off – the first assassination attempt on Hitler had taken place (if you’ll remember, exactly one year earlier, party member Ernst von Rath died after being shot by a revenge-seeking Jew).

The next day, the Voelkischer Beobachter (Nazi newspaper) “squarely placed the blame on British secret agents, even implicating Prime Minister Neville Chamberlain himself” (Source). Whether or not even the Nazi’s believed this wasn’t as important as what they hoped to accomplish: Stirring up hatred for the British while whipping up a German frenzy for war.

At the same time, Gestapo Chief, Heinrich Himmler, sent a fake “Major Schaemmel” to meet with British intelligence agents to find out what they knew about the German anti-Nazi movement. He accomplished this by pretending to seek British aid in case the anti-Nazi movement ever chose to rise up and take action.

But, this wasn’t enough for Himmler. “He wanted the British agents themselves” (Source). So, on November 9, SS soldiers kidnapped Payne Best and R.H. Stevens in Holland. They were stuffed into a Buick and driven over the boarder into Germany.

[Below: Newspaper headline of the event]

Another Version of the Story:

Actually, the plan to assassinate Hitler went back to early 1938. See, carpenter Georg Elser (a communist) decided that by killing the leader of the National Socialist party, he could help prevent the impeding war and the inevitable financial downfall (Remember that Germany had faced an even more severe depression than America, thanks to their war reparations from WWI).

Elser planned his attack out well. During the summer of 1939, “Elser gained access to the venue and found that the hall was not guarded” (Source).  So, he started “constructing a detonator mechanism and obtaining explosives” (Source). The bomb contained a 144-hour timer so that it would go off at 9:20 pm, right in the middle of Hitler’s speech. Bomb complete, Elser moved to Munich and got to work preparing the Beer Hall for his attack. Sneaking into the Hall, he began hollowing “out a cavity in a stone pillar behind the speaker’s podium” (Source).

Despite planning “his bombing to perfection … luck was not on his side” (Source). In more than one way, Elser did not have time on his side. First, by this time, WWII had already started. Second, Hitler moved his speech from 9 up to 8. By 9:12, Hitler had already wrapped up his speech and left the building. Eight minutes later, the bomb went off, “leveling and pillar and sending a section of the roof crashing down on the speaker’s podium” (Source). Unfortunately, while Hitler survived, 7 others were killed and 63 injured.

Elser was later captured while attempting to cross the Swiss boarder. After facing several days of interrogations, he confessed to the crime. “While it seems certain that Elser did plant the bomb, who the instigators were—German military or British intelligence—remains unclear. All three ‘official’ conspirators spent the war in Sachsenhausen concentration camp” (Source). On April 16, 1945, Elser was dragged from his cell and executed by the SS. (Though, another source claims he was in Dachau and executed on April 9. Not sure which is true).

[Below: Beer cellar after bomb]