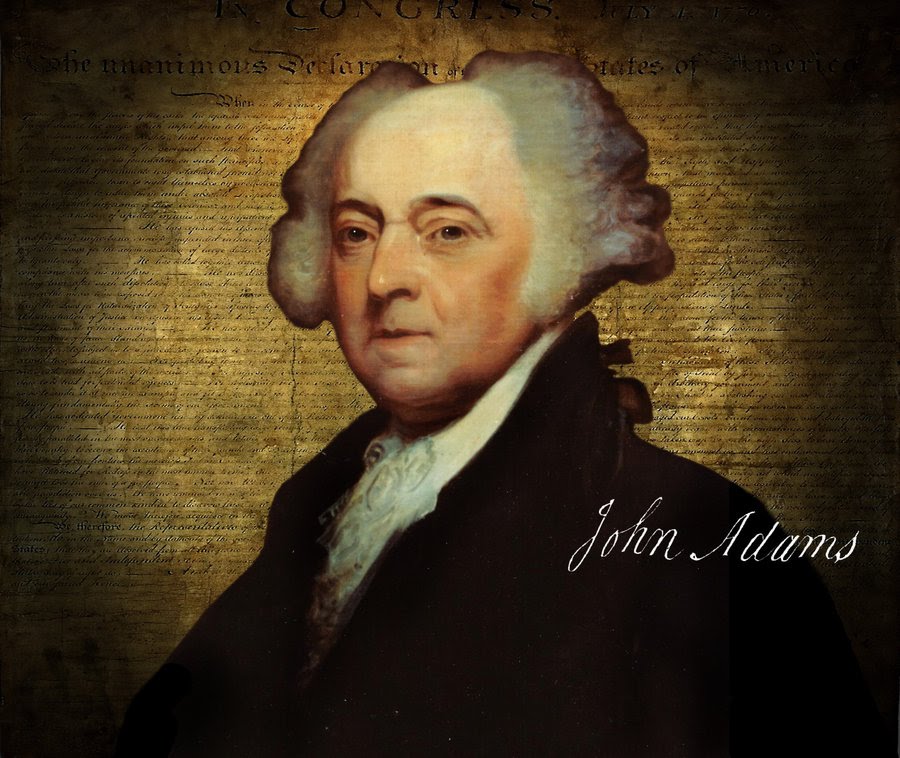 John Adams was born in 1735 in Massachusetts Bay Colony at Braintree. His birthplace – the oldest presidential house – still stands today. As a child, John wasn’t particularly interested in school, at least, not nearly as interested as he was in hunting. His childhood dream? To be a farmer.

Despite this, Adams was educated at Harvard in law. Actually, he was thought of as a very thoughtful man. He mastered his chosen field of law, as well as the classics, and was considered quite the philosophical politician. He made a name for himself during the trials for the Boston Massacre, where he was assigned to defend a British officer. Adams believed that the man was being unfairly accused and, thanks to a rousing speech in the man’s defense, he was acquitted. 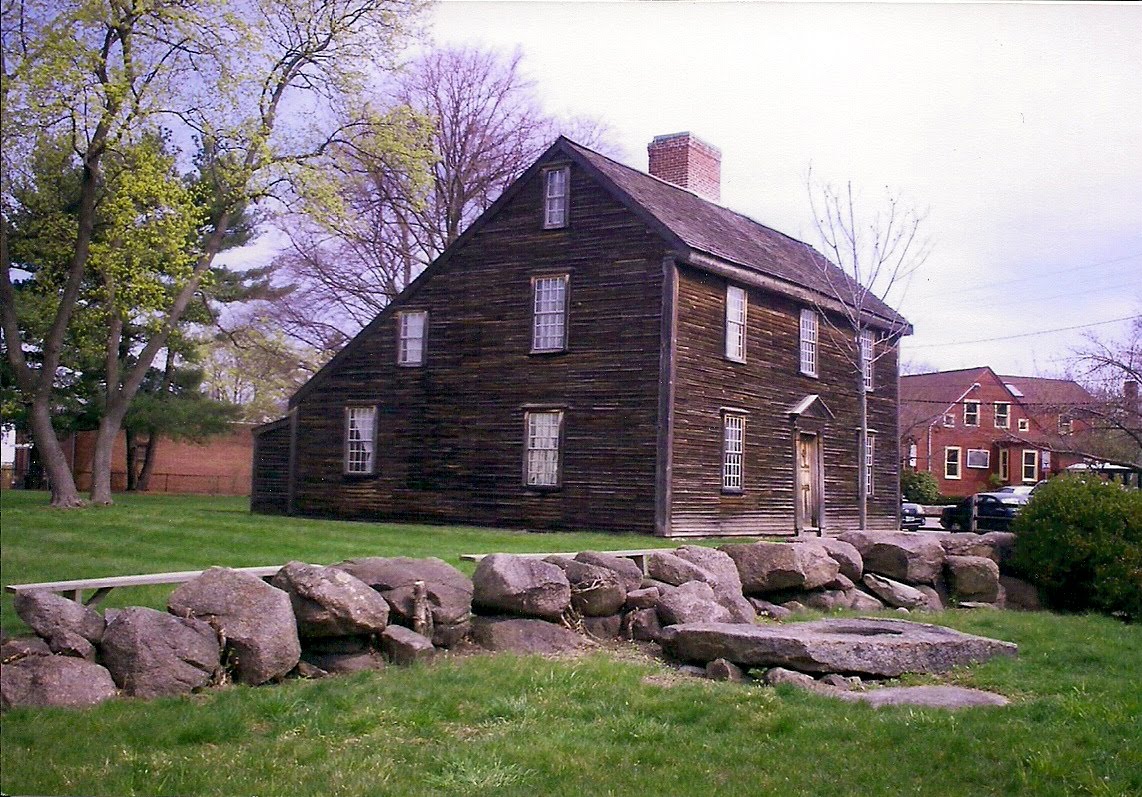 Though never in favor of mobs, he did support the Boston Tea Party as “the grandest event which has ever yet happened since the controversy with the British opened” (24). Adams was a great supporter of the colonist’s struggle for freedom, and is today considered one of it’s greatest patriots. During both the 1st and 2nd Continental Congresses, he was one of the most vocal and most vigorous supporters of declaring American freedom. In fact, it was Adams and Benjamin Franklin that approached Thomas Jefferson concerning the writing of the Declaration of Independence. And, there again, it was a rousing speech given by Adams that spurred the men of the Continental Congress to finally agree to declare their freedom, no matter what the consequences.

During the Revolutionary War, however, Adams was not a major participant, making him the first president who never served his country in the military. Though, that is not to say, of course, that Adams did not serve his country in his own capacity. During the war, he was busy in Europe on diplomatic assignments. He served in Holland and France, negotiating the Treaty of Peace of 1783. While there, he sent regular progress reports home to Congress. These unfortunately, included bits and pieces of his diary, which were, even more unfortunately, laughed at. Then, during the opening years after the new country, Adams served as the first American ambassador to the Court of St. James.

He returned from London just in time to serve as America’s 1st Vice President, though he was very unhappy in this position because President Washington did not value his input nearly as much as those of his cabinet – especially the likes of Alexander Hamilton. Even then, he served for both of Washington’s terms, and spent those years attempting to come up with a proper term for the president; something more pompous sounding than ‘Mr. President.’ Unfortunately for him, no one was very receptive to his ideas. So, Mr. President it remained.

With Washington’s announcement of his resignation after two terms in office, the very first two-party election was held. The results put Adams in office as the second President, with Jefferson serving as his VP. However, he had Jefferson, despite years of friendship, started out at odds when Adams chose to keep Washington’s cabinet in tact, despite Jefferson’s pleas for Hamilton’s removal.

Adams did more than keep Washington’s cabinet in tact, he also tried to refrain from being a party leader; he chose to leave the party organization to Hamilton, for despite his being more moderate in politics than Hamilton, they were in agreement when it came to “volatile masses” – both believed that these could lead to terrible outcomes, like the French Reign of Terror (26).

Where the two did disagree was in who should run the government. Adams, much more closely aligned to Jefferson on this matter, feared the country being run by the wealthy classes. This, he believed, was as bad for the country as the mob mentality. As his term carried on, those in the Hamilton camp believed that Adams was much too conciliatory towards Jefferson.

With the French and British war going on (something that Washington had tried in vain to avoid), Adam’s “stubborn moderation was badly needed” (26). As it was, the war was causing America great problems on the high seas. And no one was quite in agreement on which side we should support. To deal with this, Adams called a special session of Congress, suggesting that they deal with the problem by arming their merchant ships, speedily building up their own navy, and recruiting a larger army. Instead, Congress “whittled the recommendations to authorization of three frigates, the calling out of 80,000 militiamen if needed, and the arming of only those merchantmen in the East Indies or Mediterranean trade” (28).

Unfortunately, France wanted no part in negotiations with America, unless Adams paid a heavy bribe. Thus broke out the Jefferson-termed “X, Y, Z fever.” Adams never did officially declare war, but hostilities did break out at sea, raising taxes considerably. By 1800, U.S. warships were in operation. The most famous of these warships was the Constitution, the highest ranking commissioned ship in the U.S. Navy, is today on display at the Boston Navy Yard.

Adams saw many victories during the period, though formal war was never announced. Over time, Adams began to have “second thoughts about the wisdom of a war and returned to his customary moderation” (29). France felt the same way, and lengthy negotiations followed. But, throughout all this, the administration did pass the Alien and Sedition Acts, hoping to “frighten foreign agents out of the country,” (28). They were hoping to accomplish a second goal of stifling attacks from Jefferson’s Democratic-Republican party. However, all this accomplished was making Jefferson’s party into martyrs and shooting them into fame and glory.

As a result, by the time the 1800 election rolled around, the Federalist party under Adams and Hamilton was badly divided, leaving room for Jefferson to garner the needed votes for the presidency. Adams would serve only one term. Just before the elections, though, Adams would move into the newly finished, but-not-quite-fully-furnished White House. Of course, his days in office were already numbered.

After Jefferson was sworn in, Adams retired to his farm in Quincy. The house there, nicknamed the Old House, has become a national landmark. During his retirement, he and Jefferson would mend whatever had come between them during the Adams administration. The two would spend the rest of their days writing elaborate letters back and forth.

[Below: The Old House] 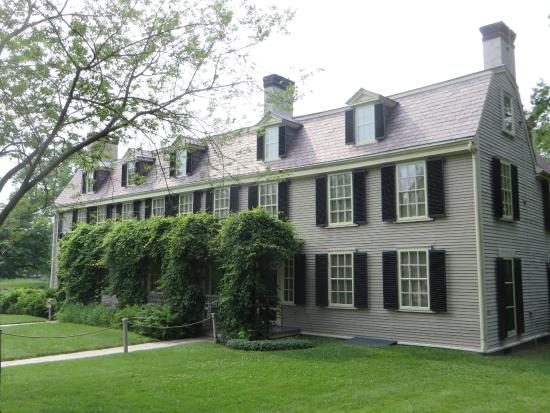