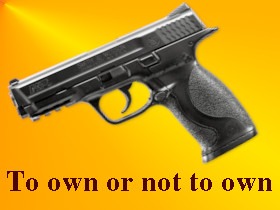 USA-eVote on the 2nd Amendment

I can tell you from experience, those who were taught firearm safety and how to fire weapons by their fathers can sight in any riffle in three shots. When they join the military they have their weapons sighted in three rounds. Those who fire their weapons for the first time take 30-100 rounds to fire a 3 round group within a 1 inch pattern. Which is required for sighting in a weapon. Some never catch on and never advance in the military. Those who have hunted with their parents understand the concepts of camouflage and cover. They not only save funds by using less ammunition, they have the basic concepts of survival in the field. In short, the 2nd Amendment as it stands saves money and ensures a much higher survival rate in battle situations, as well as ensuring a better equipped military feared by anyone choosing to be enemies of the United States.

The only thing stopping an all out invasion from our enemies is the fact, the US has 18 million retired veterans. Many of them are better armed then they were in the military. Add to that a few million hunters, and licensed firearms in the homes of individuals for personal protection and you have the best deterrent in the world. In short, the 2nd Amendment is the best form of protection the country could have. No group of generals would consider invading a country where they are out numbers by 10:1 or more. Especially when you consider the fact millions of those individuals can consistently hit a target at 300 yards or more. No computer program could every simulate the many battle conditions an invading army would face. Common sense tells those generals, secure the cities and you just placed yourself in an automatic siege situation. Your army inside the city with thousand or millions of people to feed while the food is outside in the country, protected by those who are the best shots, best armed, and organized.

When you look at the advantages the 2nd Amendment offers, weapons and ammunition should be tax deductible. A well armed population is the best defense of our freedom.

USA-eVote supports current gun licensing. A few generations ago elected government representatives looked at gun registration. Gun registration was formulated to protect the general public. Every law abiding citizen was allowed to obtain a gun license with proper training and own a gun to protect themselves from criminals. Everyone with a criminal record was denied a license to own a firearm. The concept of firearm licensing was simple. Criminals were denied the right to own a weapon. Law abiding citizens were allowed to own a weapon to protect themselves from criminals. Laws were also passed that imposed sever penalties on criminals possessing unlicensed firearms. Original laws imposed mandatory prison sentences on criminals arrested and charged with possessing an unlicensed firearm. Bails were either denied or set at very high sums. The US didn’t have a problem until judges began ignoring laws and refusing to enforce those laws. Today mandatory prison sentences are ignored. Criminals are allowed to plea bargain. And worst of all, laws established on bail to take those criminals off the street are now ignored. This created a view in the criminal mind that there is no difference between licensed citizens and criminals. Taking a view of the current situation, there is no difference between licensed citizens and criminals.

The original laws were written and passed by elected lawmakers concerned for the safety of those they are paid to represent. Today we see the complete opposite. Controlling, restricting, and eliminating police forces is nothing short of insanity and treason. That mindset places more security in the hands of criminals, offering them protection that is quickly being denied to law abiding citizens. If firearm licensing laws were enforced, we would not see the problems we see today. Imposing additional restrictions, fees, taxes, and burdens upon law abiding citizens moves our society in the opposite direction form the intent of the original licensing laws. Plain and simple, problems we see today are caused by ignoring firearm laws and the penalties they placed upon unlicensed possession of a firearm. Criminals ignore firearm licensing laws. It does not matter if they are the armed criminal on the streets, the judge on the bench, or the elected representative in the halls of congress.