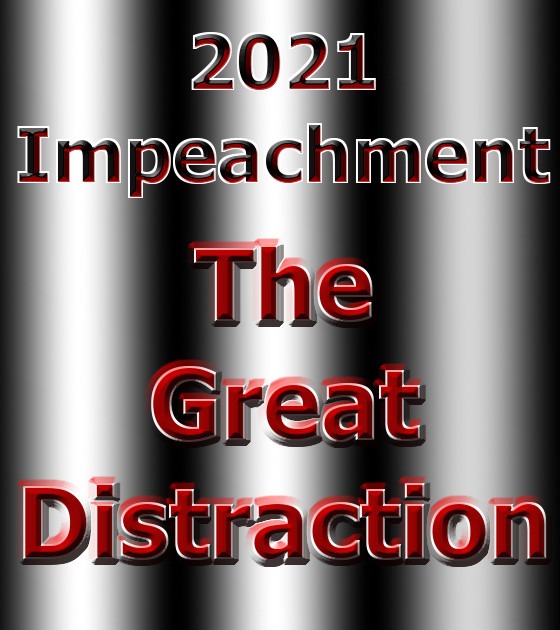 It seems Nancy Pelosi didn’t get her Valentines present. On February 13, 2021 the Senate failed to impeach former President Trump for the second time. In what appeared as a fit of rage Pelosi called a press conference to deliver what should give her the 2021 Impeachment best actress award.

“What we saw in that Senate today was a cowardly group of Republicans who apparently have no options because they were afraid to defend their job, respect the institution in which they serve. ‘Hang Mike Pence’, was the chant, and they just dismissed that. Why? Maybe because they can’t get another job,” she said hysterically.

She then went on to act like she cares about the constitution:

The impeachment of 2021 was the first impeachment designed to be covered by movie critics. The word, “election,” was repeated hundreds of times. The election was at he heart of impeachment charges.

“In the months preceding the Joint Session, President Trump repeatedly issued false statements asserting that the Presidential election results were the product of widespread fraud and should not be accepted by the American people or certified by State or Federal officials. Shortly before the Joint Session commenced, President Trump, addressed a crowd at the Ellipse in Washington, DC. There, he reiterated false claims that “we won this election, and we won it by a landslide”.

In a normal trial the prosecution bears the burden of proof. In every court the prosecution has to prove a crime has been committed. There is no law against questioning an election. If democrats accused President Trump of fabricating false accusations about the election, the prosecution must prove there was no fraud. Even the slightest proof of fraud would require any judge, jury, or anyone with common sense to find the accused innocent based on the fact, his accusations were correct.

It is the duty of every American to question election results whenever the slightest evidence of fraud is uncovered. It is the duty of every elected official at every level to investigate those chargers. The 2020 election raised more questions than any previous election in history. Judges refused to hear court cases. State legislative branches had election officials investigate the fraud they were accused of. In short, state legislature put the criminals in charge of investigating charges. Recounts were ordered and conducted. State election commissions did nothing more than supply the same results of the election calculated days after the polls closed. State election commissions refused to comply with court orders to allow access to voting machines and ballots. The list goes on and on. But in a Congressional trial centering on the 2020 election results, not one person questioned discrepancies, nor demanded a full investigation into the event that caused the entire event in question.

Throughout the entire impeachment trial democrats used the word, “election,” hundreds of times, but never offered a shred of evidence to prove the election was not tampered with. Democrats did not order an investigation into the voting machines or order open access to ballots. In short, democrats continued to hide evidence in a trial centering on the 2020 election results.

Democrats have long been known for initiating distractions. The biggest crimes rely on distractions for success. The 2020 election was the crime of the century. Other crimes are on the horizon.

Democrats accomplished a number of goals with the impeachment trial. By not having the Chief Justice present, the Senate was free to create its own rules, regulations, and procedures, and change them at will.

The Senate then acts as courtroom, jury and judge, except in presidential impeachment trials, during which the chief justice of the U.S. Supreme Court acts as judge.

Without a Chief Justice, democrats were free to set and change rules on a whim. One example was the decision to call one witness.

At issue at first on Saturday was whether to subpoena Rep. Jaime Herrera Beutler of Washington state, one of 10 Republicans to vote for Trump’s impeachment in the House. She said in a statement late Friday that Trump rebuffed a plea from McCarthy to call off the rioters. Democrats consider it key corroborating evidence that confirms the president’s “willful dereliction of duty and desertion of duty as commander in chief.”

As presented by democrat managers, Rep. Jaime Herrera Beutler suddenly remembered a phone call she over heard between McCarthy and President Trump. Instead of calling McCarthy, democrats wanted to call Beutler as a witness. The questions was, why did it take a month for Beutler to remember that phone call? It seems democrats realized they were loosing. They needed to change the rules. Taking a page from the first impeachment, democrats went back to the old, “I heard a phone conversation,” routine. The request for one witness was met with the obvious. If democrats were going to allow witnesses, Trump’s defense had a long line of witnesses consisting of over 300 people. Democrats ran an end around, refusing to allow witnesses, but after a debate, decided to read Beutler’s statement to submit it as evidence. Democrats went back to the same case they built in the first impeachment, people claiming they over heard a phone all.

To gain total control democrats needed to make changes to the judicial system or eliminate the judicial branch. For months governors in the same states where election results were questioned called for the end of state supreme courts, or restrictions on the court system. Those governors passed executive orders at will with no restraints. Courts in those states reviewed laws, and reversed many of those executive orders. Governors took to the media to condemn the judicial systems in their states.

The 2021 impeachment trial didn’t follow any trail procedures outlined in the Constitution. The Senate does have the right to set their own rules, but those rules are supposed to follow the Constitution and actual laws passed by Congress. The Senate designed an impeachment that eliminated interference from the judicial branch. Then called that, defense of the Constitution. The Senate decided to circumvent the Constitution by an simple majority vote in one house. They did not amend the Constitution, but did establish a precedent we now have no choice but to live with forever.. Democrats displayed their power over the former President of the United States as a threat targeting every American who opposes their will. If they can threaten a former President, change laws at will, ignore the Constitution, rewrite the Constitution with a simple majority vote, disallow witnesses, and control testimony, think of what they could do to a normal person. Democrats destroyed the Constitution on every level, the Executive, Legislative, and Judicial branch have all been compromised. Through all of those changes, democrats kept implying, “those changes were necessary to protect our democracy.” Why did democrats have to ignore the procedures in place for 240 years, to defend the system created to protect the American public against every form of tyranny. The only reason for such action is to initiate plans to change the Constitution and eliminate laws in place that would interfere with their plans.

The impeachment did not resemble a legal court trial by any stretch of imagination. The Trump defense team pointed that out at the beginning and throughout the trail. A trial like that has not been seen in this land since the times of king George. Patriots fought a revolution to put an end to such trails. After witnessing procedures used against a former President of the United States, the world is asking, “if they can use those trial procedures on a former President, what chance does the average citizen stand?” The free world is wondering what happened to the US.

President Trump was elected in 2016 because of the huge turn out of independent voters. Those independent voters shared a dream. If only they could elect someone who wasn’t tied in with a political party, maybe that person would expose corruption in the government. Voters wanted a whistle blower. Voters wanted someone who would go to the news media to expose every corrupt politician, telling the US exactly what they were doing. Voters wanted to see crooked politicians face a fair trials. Voters wanted everything crooked politicians feared the most. President Trump received more votes than any previous Presidential candidate in history because voters believed he would continue to expose corruption in government. Both parties had a long list of reasons to get rid of Trump, the peoples choice.

The entire impeachment was a farce. No investigation into what really happened on January 6, 2021 was ever conducted. Videos inside the capital showed police wearing different jackets, pants, weapons, some had beards, they all seemed to wear their personal choice in masks, if they chose to wear masks. After Pelosi declared mandatory masks inside the capital, you would think the police responsible for enforcing that rule would wear a mask. There were too many details in those videos telling us, the people in uniform did not resemble any disciplined military or police force. With all those questioned raised, no one requested any investigation into who those people were, or who placed them there.

Both democrats and republicans reviewed and studied hours of video. Each side presented their edited versions of that happened January 6th. Neither side included video of antifa getting off buses, nor did any side question the shabby uniforms and other deficiencies in the videos they presented. The videos presented brought up the age old question, can either party be trusted?

Neither party demanded a release of the voting machines and ballots in question. Neither offered a solution to the issue at hand, the 2020 election. It was as if the impeachment was used to sweep election questions under the rug. The impeachment exposed the fact, we still have a two party system with each party covering for the other.

American voters are still in the same boat that lead to January 6, 2021. Not a single person from either party demanded what the majority of Americans have been calling for, a complete investigation into the 2020 election. The people who gathered in Washington DC to listen to President Trump were there to REMIND Congress, they demanded a full investigation into the 2020 election results. Somehow every member of congress conveniently forgot what the real issue was. Election fraud. How can every member of Congress on both sides forget what the real issue is?

The impeachment was a diversion. What was the crime they are working to draw our attention from? Is it fixed elections, or is it the trillions of dollars of bills they’ve passed and are working to pass? Needless to say, the US is witnessing the biggest steal in world history.

We learned one thing from Trump’s tenure as President. Politicians fear people they cannot control.