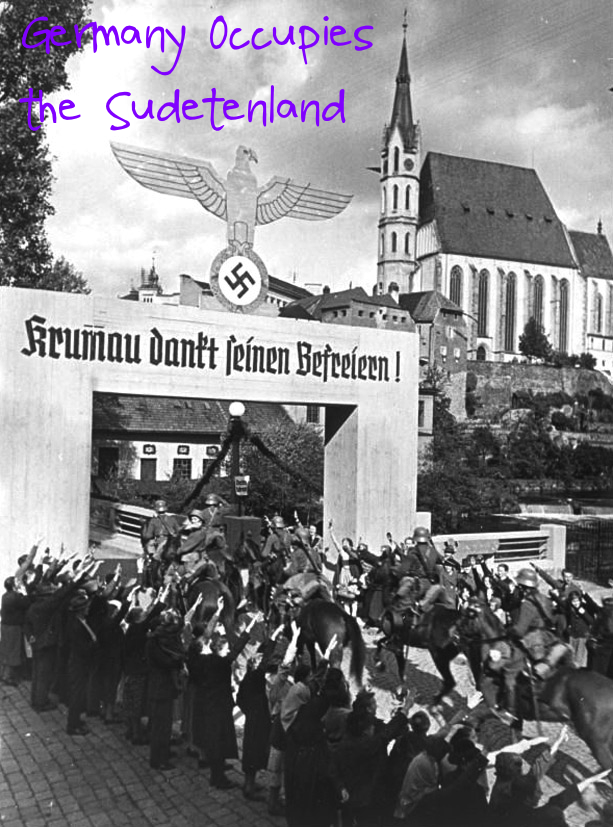 The Sudetenland: made up of western Czechoslovakia (mostly inhabited by ethnic Germans) as well as parts of Moravia and countries associated with Bohemia. Because of the many ethnic Germans living in this area, Hitler wanted it annexed as well. And so, during the Munich Agreement (to be discussed later), Chamberlain all but handed it over – with, of course, the never-intended-to-be-kept-agreement that this would appease Hitler. This is largely why Chamberlain (and his biggest supporters) is now almost synonymous with appeasement.

Ultimately, this act just emboldened Hitler to continue his annexation – or invasion – of other countries.

Prior to the Munich Agreement, in March of 1938, Hitler had met with Konrad Helein, head of the Sudeten-German party. Initially, Helein had promised to compromise with Hitler, allowing his citizens free reign “to pursue membership in Germany’s Nazi Party” (Source). This was known as the Carlsbad Decrees. However, Hitler already knew this would never go over well with the Czech government. These demands would seem too unreasonable. So, he appealed to Britain and France instead. The German citizens in Czechoslovakia were being unfairly oppressed. And only he could right this wrong. By incorporating the Sudetenland into Germany.

Prime Minister Chamberlain and other Western Powers were in strong agreement that they wanted to avoid another war. So, Chamberlain pressured Czechoslovakia President, Evard Benes, to give in. Benes resisted and, instead, in May 1938, “ordered mobilization of his nation’s military in response to reported German troop movements. Europe was on a path to war” (Source).

[Below: Germans enter the Sudetenland]

PM Chamberlain now attempted to pressure President Benes to mediate the situation. Needing to stay on good terms with the Western Powers, President Benes reluctantly agreed. He soon put forth the Fourth Plan, essentially giving Nazi Germany everything it asked for. This did little to help the situation.

Violence still erupted across the Sudetenland via protesting Germans. This, unfortunately, only reinforced Hitler’s theory of the oppression of “his” people in the Sudetenland. Czech troops responding to the violence only made this worse.

On September 15, Hitler and Chamberlain met. Hitler made his demands clear: Sudetenland or war.

But, the Czech government resisted this agreement, so Chamberlain offered them his own ultimatum: Give up the area or lose any future assistance from western Europe” (Source).

Czechoslovakia still refused to budge. Their army was well-equipped with modern conveniences. They were ready to go to war. But only with Britain and France as their allies. “A stalemate ensued” (Source).

And so, on September 29, Hitler met with Britain, France, and his alley, Italy. Again, Czechoslovakia was left out. This meeting resulted in the Munich Agreement. Czechoslovakia had no choice but to agree.

[Below: Germans greeted by ethnic Germans in the Sudetenland.]