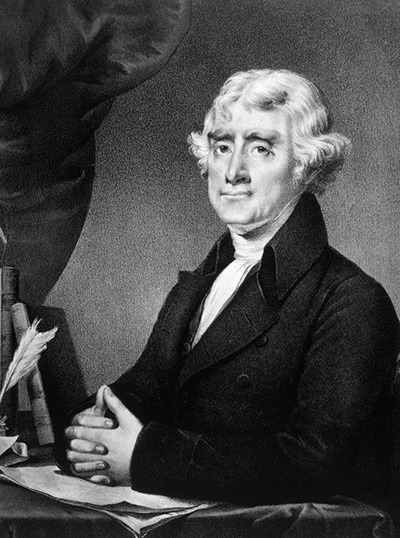 120 years ago, after the first electoral tie in American history, Thomas Jefferson is elected the 3rd president of the United States.

The 1800 election was the first vicious election in American history. Thomas Jefferson, c0-founder of the Democratic-Republican party, announced a run against then Federalist president, John Adams. This election foreshadowed what future American elections would look like: highly partisan jabs, high contentious electoral cycles, and bitter feelings of the losing party.

Thomas Jefferson was very popular candidate, and no stranger to high office. After all, he’d been the first Secretary of State under George Washington, and the 2nd Vice President under John Adams. He’d also served in two Continental Congresses. Not only this, but Jefferson had much to offer the young country: Limited government, for staters. He also was in favor of State’s Rights, in great opposition to a federal bank, and a very strong supporter of an agrarian economy. All of these aspects are still highly viewed in today’s country. So, it’s no wonder he was popular in 1801, before the unset of too much federal government and too many unelected bureaucrats.

At the end of a bloody election cycle, Thomas Jefferson and Aaron Burr emerged tied at 73 electoral votes each, with poor John Adams coming in at 65. For the very first time, Congress would have to decide would would rule the country. Mercifully, our Founding Fathers foresaw such a situation, and wrote the rules clearly into the Constitution. The House of Representatives voted from Jefferson, thanks to Alexander Hamilton’s slightly uncouth insistence.

In his Inaugural Address two weeks later, Jefferson declared: “We are all Republicans, we are all Federalists,” a call that would be mimicked throughout history by American leaders in times of great distress, even abroad.