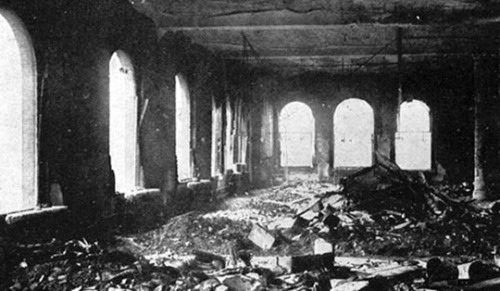 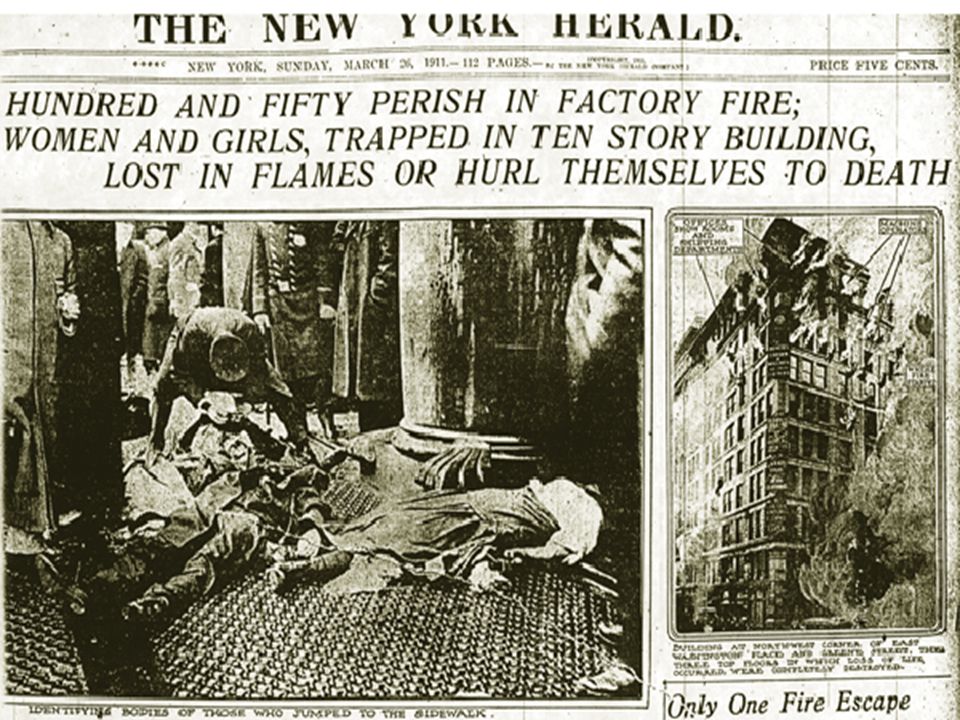 On Saturday, March 25, 1911, a fire broke out on “the eighth, ninth and tenth floors of the Asch Building,  at 23–29 Washington Place in the Greenwich Village neighborhood of Manhattan” – these three floors housed the Triangle Shirtwaist Factory (Source). This factory, like many others, was known for it’s poor conditions, long hours, and poor treatment of the young women who worked there making shirtwaists  (slightly different from what we know as shirtwaists today).

Though textbooks site the fire as the event that led to workplace safety as we know it today, this is not entirely true. In all actuality, the fire “brought attention to the events leading up to the fire” – such as the locked fire exits, flames and flammable objects in close proximity (one story talks about a heaters being brought in), too long hours, inadequate heating, etc (Source).

Girls as young as 15 “worked seven days a week from 7 am to 8 pm with a half-hour lunch break” (Source). They were paid from $7-12 a week. Some factories required them to bring their own needles, thread, irons, and even sewing machines. The factories were unsanitary, at best. The exits were locked because the management did not want the girls’ work days to be interrupted, even by using the restroom. [Below: The building in use by the Triangle Factory works & the building on fire.]

More about the Fire:

The Triangle Shirtwaist Factory fire was “the deadliest industrial disaster in the history of the city and one of the deadliest in U.S. history” (Source). It caused the deaths of 146 garment workers – “who died from the fire, smoke inhalation, or falling or jumping to their deaths” (Source).

“The fire flared up at approximately 4:40 pm in a scrap bin under one of the cutter’s tables at the northeast corner of the eighth floor… . The Fire Marshal concluded that the likely cause of the fire was the disposal of an unextinguished match or cigarette butt in the scrap bin, which held two months’ worth of accumulated cuttings by the time of the fire. Beneath the table in the wooden bin were hundreds of pounds of scraps which were left over from the several thousand shirtwaists that had been cut at that table. The scraps piled up from the last time the bin was emptied, coupled with the hanging fabrics that surrounded it; the steel trim was the only thing that was not highly flammable. Although smoking was banned in the factory, cutters were known to sneak cigarettes, exhaling the smoke through their lapels to avoid detection. A  New York Times  article suggested that the fire may have been started by the engines running the  sewing machines.” (Source).

A bookkeeper on the 8th floor was able to alert those on the 10th floor via telephone, but otherwise, there was no form of alarm. Additionally, the man who held the key to the locked exits had already escaped!

The building that housed Triangle was not actually up to code in that it did not have the required three sets of stairways, only two. Additionally, one of the two usable stairwells was locked, as were the fire escapes – although the stairwells were impassable with fire after just three minutes. However, some girls were able to escape via the single exterior fire escape – this, however, was “a flimsy and poorly anchored iron structure which may have been broken before the fire. It soon twisted and collapsed from the heat and overload, spilling about 20 victims nearly 100 feet (30 m) to their deaths on the concrete pavement below” (Source). Other girls were able to escape by climbing to the roof before the Greene Street stairwell became impassable. Still more girls were rescued by elevator operators Joseph Zito and Gaspar Mortillalo, who travelled up to the 9th floor three times to rescue girls before the rails of Mortillalo’s elevator collapsed under the heat. Some girls attempted prying open the door and jumping down the empty shaft of Zito’s elevator, “trying to slide down the cables or to land on top of the car. The weight and impacts of these bodies warped the elevator car and made it impossible for Zito to make another attempt” (Source).

The rest of the girls, however, were trapped. Even though firefighters did arrive on the scene quickly, their ladders were not nearly tall enough to reach the top floors – leaving the girls to jump to their deaths. Firefighters did try catching them, but the height was so great that they broke through the fabric of the life nets. “Occasionally a girl who had hesitated too long was licked by pursuing flames and, screaming with clothing and hair ablaze, plunged like a living torch to the street” (Source).  In total, 146 garment workers died that day, most of whom were recent Jewish and Italian immigrant women aged 16-23.

“Bodies of the victims were taken to Charities Pier (also called Misery Lane), located at 26th street and the East River, for identification by friends and relatives. Victims were interred in sixteen different cemeteries. Twenty-two victims of the fire were buried by the Hebrew Free Burial Association  in a special section at Mount Richmond Cemetery. In some instances, their tombstones refer to the fire. Six victims remained unidentified until Michael Hirsch, a historian, completed four years of researching newspaper articles and other sources for missing persons and was able to identify each of them by name. Those six victims were buried together in the Cemetery of the Evergreens in Brooklyn. Originally interred elsewhere on the grounds, their remains now lie beneath a monument to the tragedy, a large marble slab featuring a kneeling woman” (Source).

A week after the fire, wealthy suffragists, Ann Morgan and Alva Belmont, hosted a meeting at the Metropolitan Opera House, demanding “action on fire safety” (Source). Days later, “more than 350,000 people participated in a funeral march for the Triangle Dead” (Source).

Thanks to pressure from the activists, three months later, the Factory Investigating Commission was created. The building is now designated a National Historic Landmark. [Below: The charred remains of the 10th floor.]