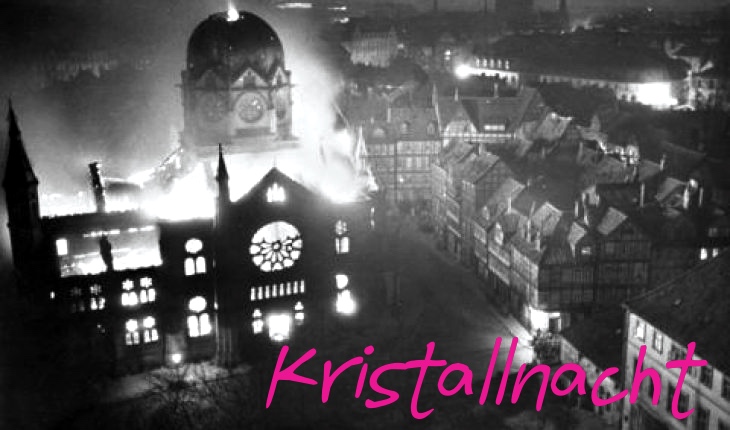 Kristallnacht is probably one of the most-well remembered Nazi anti-Jewish events. To put it simply, it was disgusting. It was simply an excuse to get rid of the Jews and push forward their Nuremberg Laws. Sort of like, oh I don’t know, The Reichstag Fire.

Prior to this, while Hitler’s anti-Semitic views had been well-known, they had mostly been nonviolent. And even the camps that had already opened their doors had mostly political prisoners, not Jews. This marked the turning point.

According to Nazi officials, this outbreak was a “spontaneous outburst of public sentiment in response to the assassination of Ernst vom Rath” (Source). An embassy official who had been stationed in Paris, vom Rath had been shot by a Polish Jew on the night of the 7th. This was in response to the news that thousands of Polish Jews living in German territory were being kicked out of their country. Many of these Jews were “initially denied entry into their native Poland” and Herschel Grynszpan, living illegally in Paris at the time, decided to seek revenge for his parents, who were among the displaced Jewish Poles (Source).

Vom Rath died two days later, on November 9, the 15th anniversary of the Beer Hall Putsch. Falling on such an important National Socialist date, gave Nazi leaders all the pretext they needed to “launch a night of anti-Semitic excesses” (Source).

[Below: Onlookers at a smashed Jewish shop]

It’s no surprise that propaganda minister, Joseph Goebbels, was behind Kristallnacht, encouraging his minions to carry on, so long as their destruction did not appear too coordinated. He told them that Hitler wanted everything to appear spontaneous. Even then, after his speech, he gathered regional Party leaders and issued instructions.

Hours later, Reinhard Heydrich sent out an urgent telegram with his own directives: Only harm Polish Jews and their property. Also, be sure to gather all records from synagogues before vandalizing the synagogues themselves. (After all, the Nazis wouldn’t want to leave anyone out.)

In all, Nazi Party officials, SA, and Hitler Youth rioters destroyed 267 synagogues, many of them burning throughout the night with firefighters only on scene to be sure the fires didn’t spread to other buildings. Additionally, they shattered the windows of some 7,500 Jewish-owned businesses, after looting their wares, of course. Even Jewish cemeteries could not escape destruction. In fact, they became quite the target.

In Berlin and Vienna, mobs of SA men mobbed the streets. They beat and humiliated any Jews they came across and attacked Jews in their homes. Although there were no directions given about killing, the SA went ahead a killed approximately 100 Jews.

In the aftermath, “a high number of rapes and of suicides” were reported (Source). Heydrich instructed that SA and the Gestapo arrest up to 300,000 Jewish males and send them to Dachau, Buchenwald, and Sachsenhausen (or the other opened camps).

On November 12, the German government immediately pronounced that the Jews themselves were responsible for all the damage. Not only were they fined one billion Reichsmark ($400,000,000 US dollars in ‘38), but they also had their insurance payouts confiscated, meaning they had to pay out of pocket for any repairs and items stolen.

In short, leaders such as Hermann Göring “decided to use the opportunity to introduce measures to eliminate Jews and perceived Jewish influence from the German economic sphere” (Source). This included more laws, like the ones discussed earlier, meant to prevent Jews from associating with Germans and depriving them of making a living or keeping their properties.