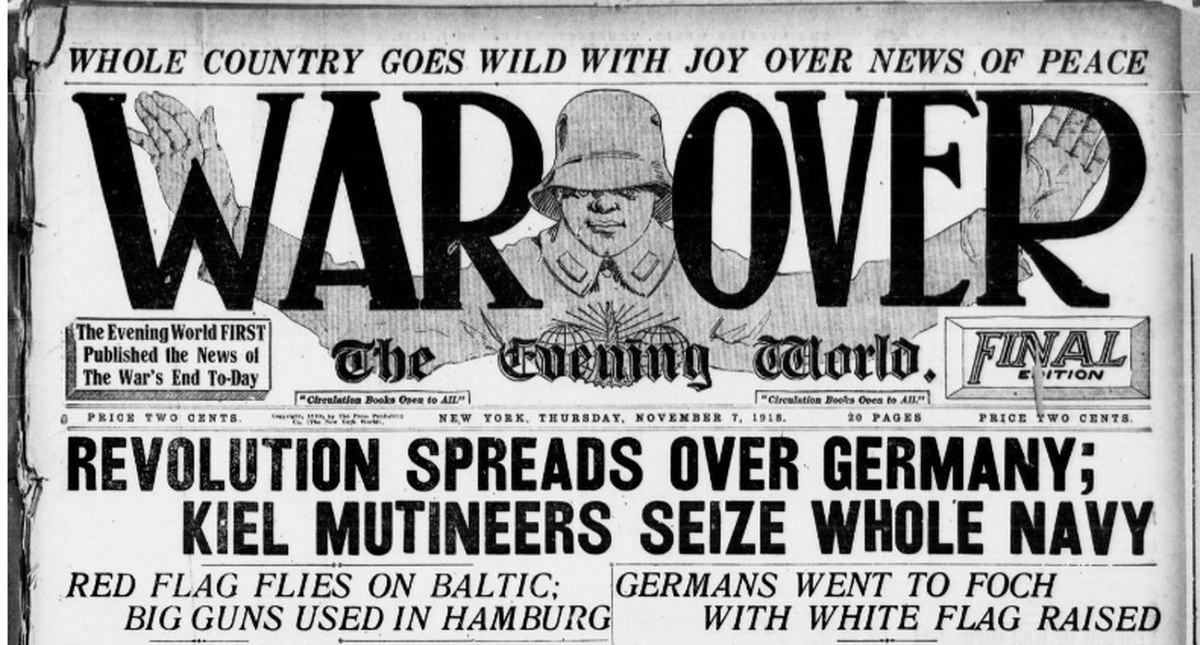 On November 11, 1918, at 11:00 AM an armistice was signed. It marked a victory for the Allies and a complete defeat for Germany, although not formally a surrender. In it, both sides agreed to end the fighting while terms of peace were negotiated. But that’s just it. It was not an actual end to the war. It was an agreement to put a pause on the fighting, until further notice. This further notice just happened to last 21 years. The time it would take to raise an entire generation of young men (and women) who would face battle. Or, the continuation of a great war.

“An armistice is a formal agreement of warring parties to stop fighting. It is not necessarily the end of a war, since it may constitute only a cessation of hostilities while an attempt is made to negotiate a lasting peace. It is derived from the Latin arma, meaning “arms” (as in weapons) and -stitium, meaning “a stopping”.[1]”

“The Armistice was designed to end the fighting of WWI, and the terms of it would make it impossible for Germany to restart the war, at least in the short term… . If Germany broke any of the terms of the Armistice … fighting would begin again with 48 hours notice” (tenfactsabout.co.uk). “The armistice initially ran for 30 days but was regularly renewed until the formal peace treaty was signed at Versailles the following year. Before the Treaty of Versailles, the Allies kept their armies ready to begin hostilities back again within 48 hours” (Source). Apparently by Nov 5th, after a month-long attempt at peace negotiations, during which time Germany agreed to negotiate Woodrow Wilson’s 14 Points only to then threaten resuming war when they found the Allies’ negotiations unacceptable, the Allies agreed to take up negotiations for a truce, now also demanding reparation payments from Germany. [Above is the only picture of the signing ceremony]

Some scholars argue that WWI and WWII are, essentially, the same war. On the same note, some also believe (a historian friend of mine included) that The Treaty of Versailles lead to WWII. The Treaty of Versailles forced Germany to accept full responsibility for the damages of the war and forced them to pay reparations to the tune of 132 billion gold marks (US 33 billion dollars). This led to wide-spread poverty and unemployment (as noted in an earlier post) and made it easier for Hitler to claim power (also noted earlier). Actually, Germany did not completely pay off their debt until 2010! (source same as above). So the Allies claim victory because Germany was forced into negotiations or else lose the war. We had temporary peace on the Western front. But left Germany in such tight straights that, really, another war was almost inevitable. So much for a victory, huh?

If anyone is interested in WWI historical fiction, let me first recommend All Quiet on the Western Front (coincidentally given to me by Michael (yeah, I got sick of mentioning him by his major!)) by Erich Maria Remarque. It tells the story from the German perspective and was, interestingly enough, on Hitler’s banned books list.

And well! Remember our vets today – both fallen or still with us. Wear your poppy with pride and, if possible, thank a veteran for the freedom you have today. Lest We Forget.