After the Soviets invaded Poland on September 17, 1940, what transpired was something very similar to what transpired in Western Poland: death, torture, imprisonment, starvation, etc. What makes the Soviet invasion stand out in a way that even the Warsaw Ghetto can’t, is one of the largest mass shootings in history: The Katyn Massacre.

Now, the Katyn Massacre is the term referring to the mass execution of Poles throughout the Soviet Ukraine and Belarus republics. The mass burial was in the Katyn forest.

But a bit of background, first. At the end of WWI, Poland finally became an independent country. Then, in 1921, the Poland, Soviet Union, and Ukraine signed the Treaty of Riga, which effectively established an Eastern Polish boarder, separate from Soviet Russia. As one can probably guess, the Soviet Union were quite angered by the loss of their occupied land, and were already planning their expansion West back into Poland. This, long before WW2 was on anyone’s mind. Even then, a pact was signed in 1932, the Polish-Soviet Non-Aggression Pact. Of course, at this point, we’re fully aware of how non-binding Non-Aggression Pacts actually are. The Soviet Union felt no more need to abide by them than the Nazis did. The Pact promised that if one of the countries should be attacked, the other would not help the aggressor. Of course, when Poland was invaded on September 1, 1939, the Soviet Union moved forward 16 days later to also invade Poland.

After the Soviet invasion of Poland, on September 26th,  Germany and the Soviet Union officially divided up Poland, a land that didn’t even belong to them. After this division, the NKVD and the Gestapo coordinated their efforts, or rather, their atrocities.

A mere two days after their invasion, the NKVD created the Directorate of Prisoners of War, effectively taking into custody “Polish prisoners from the Army” and “organizing a network of reception centers and transfer camps and arranging rail transport to the western USSR” (Source). In other words, on both sides of the division line, Poles were being sent to concentration camps for the mere reason that they were Polish.

The camps, located in former monasteries now converted into prison camps, were located in Kozelsk, Starobeisk, and Ostashkov. While here, between October and February, the Poles were subjected to intense interrogations as well as relentless political agitation. 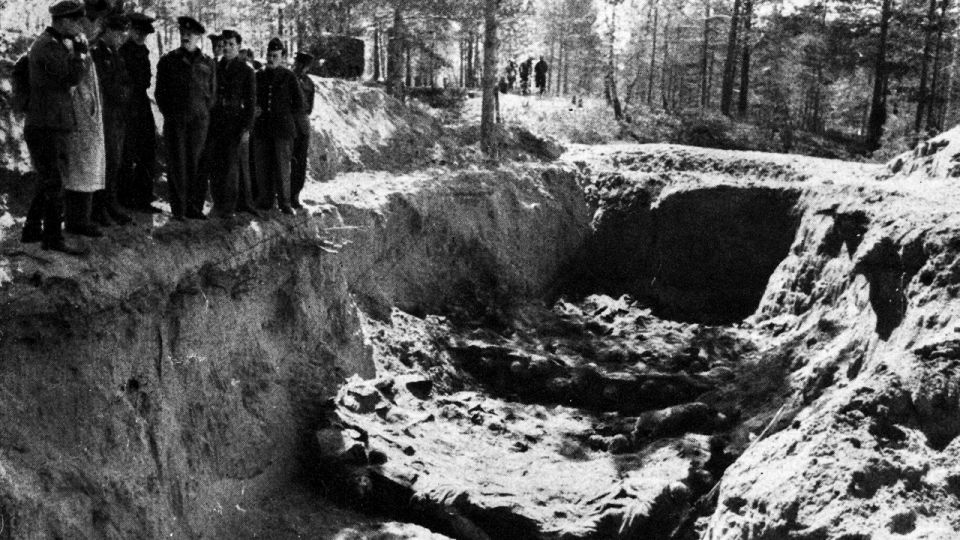 In the meantime, other officers, clerks, judges, prosecutors, political prisoners, and social activists were kept in Western Ukraine and Western Belarusia. Here, 7,300 Poles were murdered while another 1,980 were killed in Bykivnia (near Kiev), and up to 200,000 more were murdered and buried in mass graves in the Kuropaty Forest.

The list really is endless. The Soviets, like the Germans, killed anyone who might be a threat to the sate: doctors, lawyers, teachers, engineers, industrialists, scholars, writers, librarians, on and on the list goes. Of these, it is believed that up to 327,000 Poles were deported, mostly to Soviet camps.

All of this went unknown until April 13, 1943, when Germans drew attention to the killing fields. The Soviets – being the dishonest Communists that they are – told the world that the Nazis were responsible for these deaths. And even today, people chose to believe this. While the Nazis aren’t exactly known to be truthful and honest, to automatically assume the verity of the Soviet claims is, well, a bit asinine. And even if, for probably political reasons, one was to believe the Russian lies, it still calls into question why, exactly, they were holding tens – if not hundreds – of thousands of Poles in camps in Russia.

On the part of the US and British governments, well, they know full-well who was to blame for the mass killing of the Poles, (both, in all reality). But the culprit of the Katyn Massacre was the NKVD, and the Allied governments knew this, but acknowledging this could make whatever negotiations between them and the Soviet Union only less likely than they currently were. Remember that negotiating with Stalin was no easy task to begin with. The lie was carried on to the Nuremberg Trials, were Stalin and the Soviets attempted to hang German war criminals for the death of 11,000 Polish officers at Katyn. However, the evidence of this was so disputable that it wasn’t even included in the final documents. Yet, despite these obvious facts, people today still claim that the Germans were responsible for the Katyn Massacre.

[Below: Mass grave in the Katyn Forest]