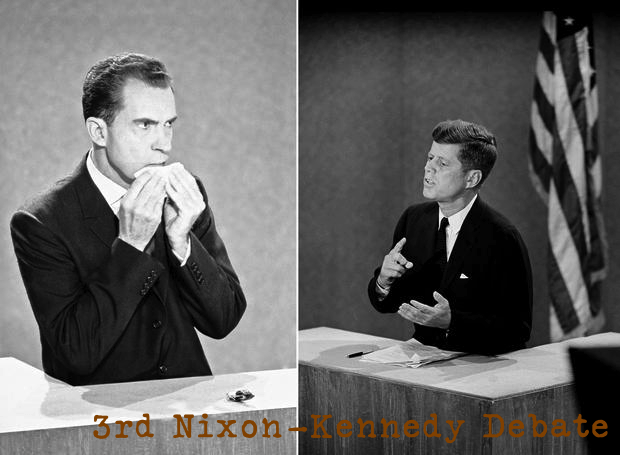 On October 13, 1960, Senator Kennedy and Vice President Nixon held their third of four debates. And, let me just tell you, it was next to impossible to find anything on this debate. It didn’t even show up in history.com’s this day in history. I only found one source.

This time around, the two candidates weren’t even in the same studio – let alone the same state. Nixon was in Hollywood, while Kennedy was in New York. The panelists, even, were in a separate studio.

The topic of debate #3: Foreign Policy & US Economy including

The Ku Klux Klan topic actually came about because, apparently, one leader claimed that he planned to vote for Nixon. Kennedy defended Nixon, promising the American people that this in no way meant that Nixon backed, had sympathies for, or supported them in any way, shape, or form. Nixon agreed.

In another question, Kennedy was accused of backing “compulsory arbitration of labor disputes” (Source). Kennedy explained that his staff had released the press statement and he had made them retract it later that same afternoon. He went on to assure them that he did not favor such a position, though Nixon pointed out that he did at one time. Kennedy replied that: “I always have difficulty recognizing my positions when they are stated by the Vice President” (Source).

It was determined far and wide that Nixon had far a solid victory for the third debate. The reason? Republicans thought it was shameful of Kennedy to use notes in one of his responses. Kennedy had attempted to explain that he was reading “a photostat of a page from a book by Gen. Matthew Ridgeway and had written brief quotes from [President Eisenhower] and from [Secretary of State] John F. Dulles” (Source).

Nevertheless, Kennedy was hammered for days afterwards and it looked like Nixon was sure to win the election.