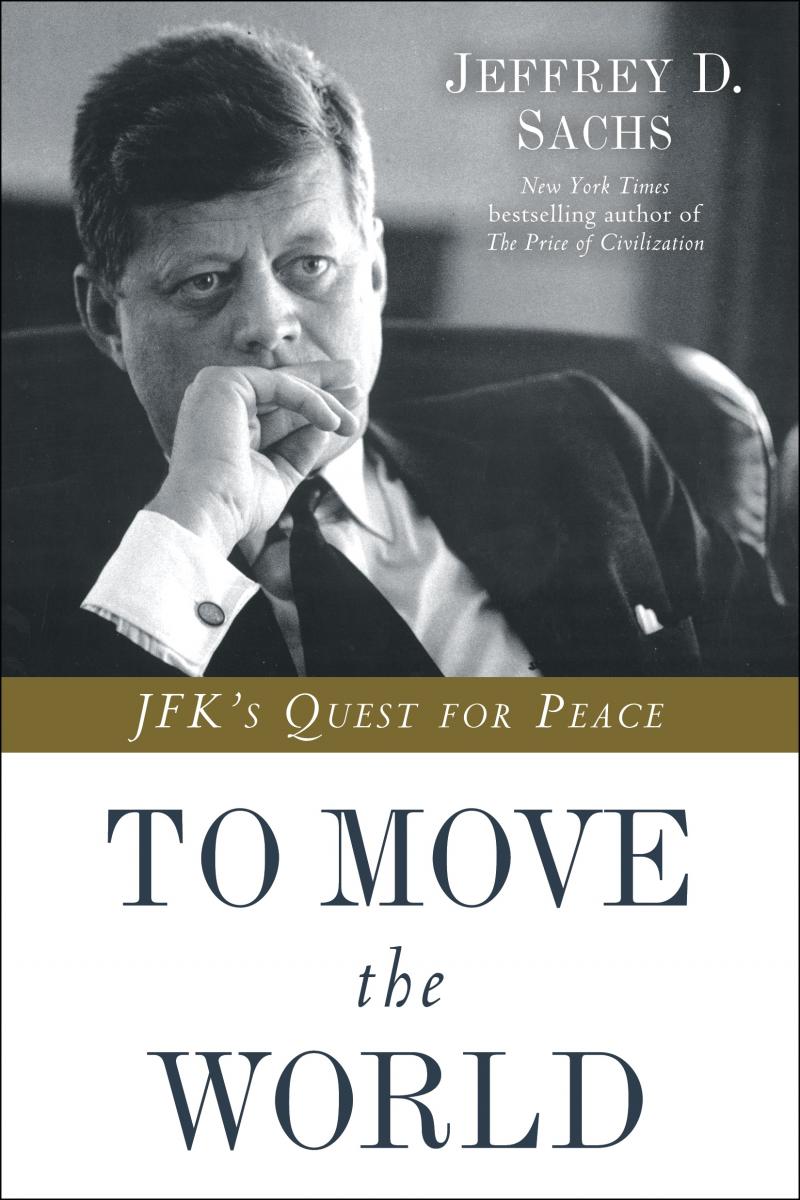 To Move the World

The last great campaign of John F. Kennedy’s life was not the battle for reelection he did not live to wage, but the struggle for a sustainable peace with the Soviet Union. To Move the Worldrecalls the extraordinary days from October 1962 to September 1963, when JFK marshaled the power of oratory and his remarkable political skills to establish more peaceful relations with the Soviet Union and a dramatic slowdown in the proliferation of nuclear arms.

Kennedy and his Soviet counterpart, Nikita Khrushchev, led their nations during the Cuban Missile Crisis, when the two superpowers came eyeball to eyeball at the nuclear abyss. This near-death experience shook both leaders deeply. Jeffrey D. Sachs shows how Kennedy emerged from the Missile crisis with the determination and prodigious skills to forge a new and less threatening direction for the world. Together, he and Khrushchev would pull the world away from the nuclear precipice, charting a path for future peacemakers to follow.

During his final year in office, Kennedy gave a series of speeches in which he pushed back against the momentum of the Cold War to persuade the world that peace with the Soviets was possible. The oratorical high point came on June 10, 1963, when Kennedy delivered the most important foreign policy speech of the modern presidency.  He argued against the prevailing pessimism that viewed humanity as doomed by forces beyond its control. Mankind, argued Kennedy, could bring a new peace into reality through a bold vision combined with concrete and practical measures.

Achieving the first of those measures in the summer of 1963, the Partial Nuclear Test Ban Treaty, required more than just speechmaking, however. Kennedy had to use his great gifts of persuasion on multiple fronts—with fractious allies, hawkish Republican congressmen, dubious members of his own administration, and the American and world public—to persuade a skeptical world that cooperation between the superpowers was realistic and necessary. Sachs shows how Kennedy campaigned for his vision and opened the eyes of the American people and the world to the possibilities of peace.

Featuring the full text of JFK’s speeches from this period, as well as striking photographs, To Move the World gives us a startlingly fresh perspective on Kennedy’s presidency and a model for strong leadership and problem solving in our time.

To Move the World: JFK’s Quest for Peace (2014) discusses President Kennedy’s crusade for world peace. Sachs covers Kennedy’s distrust of the Soviet Union and Cuba that led to his early blunders – such as the Bay of Pigs and the Cuban Missile Crisis. But it was these very events that forced him to see the Cold War from a different perspective: What would happen if he really had crossed that line? If he had blinked instead of Khrushchev? The world had been on the brink of a nuclear holocaust, and instead of preventing it, he could have just as easily caused it.

But Kennedy’s influences didn’t start with the Cuban Missile Crisis. It didn’t even start with Germany’s invasion of Poland (he was living in England at the time and went to hear Churchill speak in Parliament). In started when he was 15 and first read Churchill’s memoirs of WWI. From there on out, Churchill was his biggest hero – and the man after whom he would fashion his ideologies and his rhetoric.

Because of his heavy influence, Sachs spends a great amount of time studying Kennedy’s rhetoric on peace. And by extension, Churchill’s rhetoric on peace. And what may come as shocking, on Eisenhower’s rhetoric on peace. After all, Eisenhower gave one of the top three Presidential Farewell Warnings just a mere three days before Kennedy gave the most famous inaugural address of all time. And they followed similar themes. Moreover, when planning out his first General Assembly speech in 1961 as well as his ‘Peace Speech’ in 1963, Kennedy studied Churchill’s greatest speeches including his ‘Sinews of Peace’ speech from 1946 (aka Iron Curtain speech) as well as Eisenhower’s ‘Atoms for Peace’ speech (1953) and ‘Chance for Peace’ speech (1953). These speeches not only influenced Kennedy’s rhetoric, but also paved the way of his speeches.

To Move the World covers Kennedy’s quest for peace – not to appease Khrushchev and his policy’s, but to understand the other side, to negotiate, and to find a way to peace. To move away from the dangerous arms race and the treat of nuclear holocaust. It follows Kennedy’s plea for a nuclear test ban treaty, which was he able to successfully pass and sign before his death.

To be perfectly honest, while the book does a good job of balancing Kennedy’s concern for peace and his insistence on staying militarily strong, not backing down to the Soviets. He spoke strongly against Communism, yet sought ways to get along with the Soviets. (Yet Sachs could have been a bit more fair to Eisenhower), and I certainly could have done without the last two chapters, which had very little to do with Kennedy’s quest for peace. That being said, like said earlier, the book did a fair job of presenting Kennedy’s quest for peace. I gave it 3 stars.

Goodreads: To Move the World: JFK’s Quest for Peace