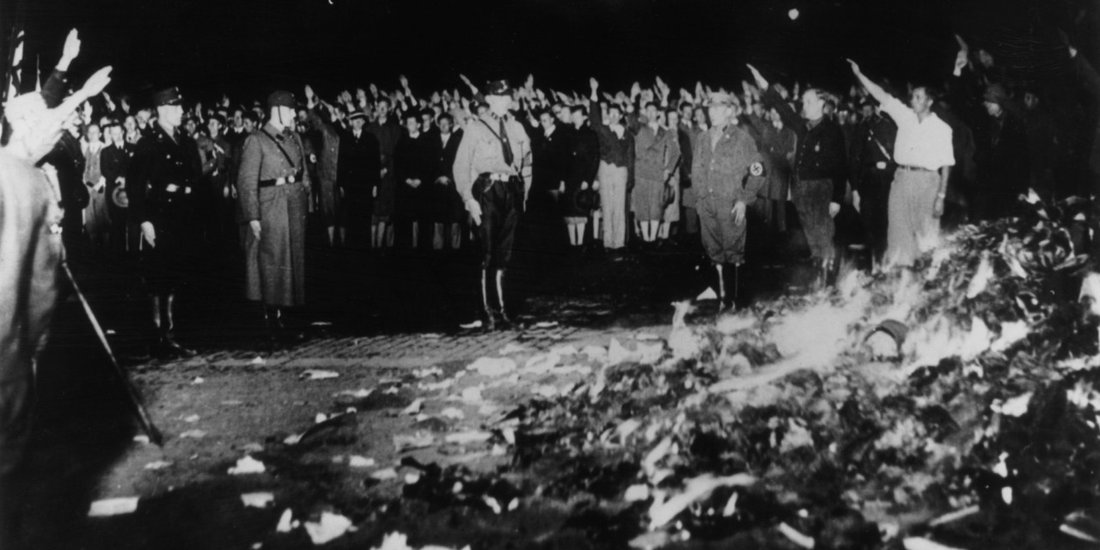 “Where books are burned, human beings are destined to be burned, too.” ~ Heinrich Heine

On September 15, 1935, during an annual party rally, the Nazis announced the laws that “institutionalized many of the racial theories prevalent in Nazi ideology” (Source). These laws would, essentially, deprive Jews of most political rights. It also set out to define a “Jew”: Someone with three or four Jewish grandparents, regardless of wether they practiced Judaism, Christianity, or no religion at all.

These laws also forbade Jews from marrying Germans. Additionally, Jews could not employ German females under 45 in their households. The Nuremberg Laws were just the “precursor to other more degrading decrees” (Source). They may have been a “precursor” of more to come, but they certainly were not the beginning.

The slow build-up to these precursor laws began two years earlier, barely three months after Hitler’s rise to power. In fact, it was a mere week after the Enabling Act was passed that, on April 1, Nazis would make their first boycott: Jewish owned shops.

Propaganda Minister Joseph Goebbels gave a speech in Berlin, urging Germans to boycott the shops in response to “atrocity propaganda” spread by “international Jewry” (Source). Nazi stormtroopers blocked Jewish businesses (even those of doctors and lawyers). “The star of David was painted in yellow and black across thousands of doors and windows” (Source). Acts of violence against Jews and their businesses occurred, but few Germans actually listened to Goebbels’s “warning.”

By April 7, The Law for the Restoration of the Professional Civil Service was passed, forcing “all non-Aryans to retire from the legal profession and civil service” (Source). Before long, they were forced to retire from other professions as well.

[Below: Boycott of Jewish-owned businesses.]

On May 10, 1933, university students gathered in Berlin and 33 other university towns to burn some 25,000 books containing “unGerman” ideas, “presaging an ear of state censorship and control of culture” (Source). In Berline alone, some 40,000 students took part. Books by Freud, Einstein, Thomas Mann, Jack London, Karl Marx, Hemingway, Erich Maria Remarque, H.G. Wells, and many others went “up in flames as they [gave] the Nazi salutes” (Source). Students also marched in torchlight parades and took part in rituals lead out by Nazi officials, professors, and university leaders.

Goebbels gave a speech concerning this, as well: “And thus you do well in this midnight hour to commit to the flames the evil spirit of the past. This is a strong, great and symbolic deed – a deed which should document the following for the world to know – Here the intellectual foundation of the November (Democratic) Republic is sinking to the ground, but from this wreckage the phoenix of a new spirit will triumphantly rise . . . ” (Source).

In July of 1933, Jews were stripped of their citizenship, and those who had recently immigrated were deported. “Many towns posted signs forbidding entry to Jews” (Source).

On July 14, 1933, The Law for the Prevention of Hereditarily Diseased Offspring was passed, calling “for the compulsory sterilisation of people with a range of hereditary, physical, and mental illnesses.” Likewise, it “was also used to force the incarceration in prison or Nazi concentration camps of ‘social misfits’ such as the chronically unemployed, prostitutes, beggars, alcoholics, homeless vagrants, and Romani people” (Source).

In 1935, assaults, vandalism, and boycotts against Jews spread across the country after nearly a year of being curbed. The violence was again moderated during the 1936 Olympic Games to prevent international criticism. But persecution stepped up again in 1937 and 1938. Jews were required to register their property. Germans also took steps to Aryanize Jewish shops by dismissing all Jews and replacing them with Germans.

October 18: The Law for the Protection of the Heredity Health of German Peoples was passed, requiring all “prospective marring partners to obtain from the public health authorities a certificate of fitness to marry. Such certificates are refused to those suffering from ‘hereditary illnesses’ and contagious diseases and those attempting to marry in violation of the Nuremberg Laws” (Source).

November 14: The Nuremberg Laws were extended to other inferior races.