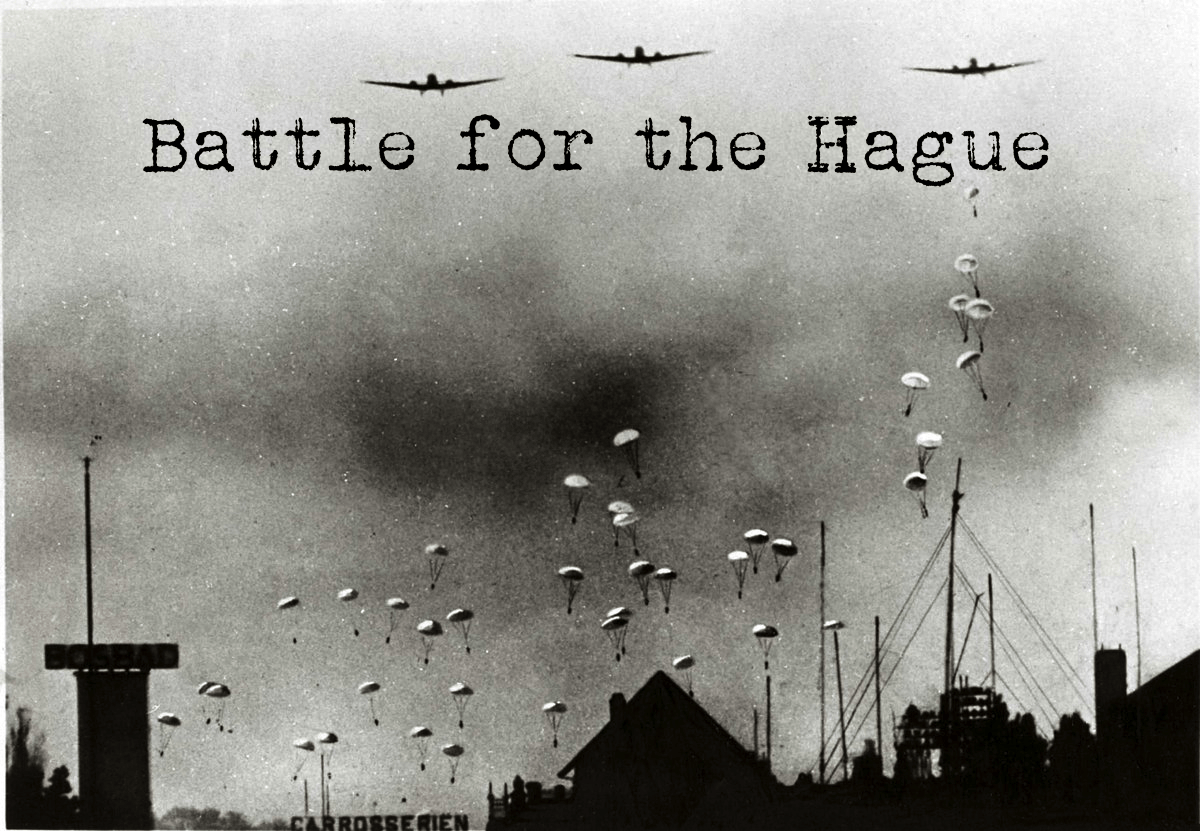 Battle for the Hague

On May 10, 1940, at 4:00 am, as part of the Battle of the Netherlands, fought between the Royal Netherlands Army and the German Luftwaffe, paratroopers “dropped in and around The Hague in order to capture Dutch airfields and the city” (Source). This was the first paratroop assault in history.

And, well, see, the Dutch, who were smartly alert at the time, overheard the noise from the aircraft formations flying overhead, then turning around and flying over again. The first target, Ypenburg, was attacked, dropping “the 1st Battalion of the 2nd Fallschirmjaeger Regiment around the area” (Source). However, since the Dutch heard the plans, they were able to get their own planes into the air quickly enough to claim some victories for themselves. This just before being shot down themselves or being forced to land. Essentially, the Germans did manage to capture all three fields.

But then “the Dutch Army launched a counter-attack several hours later” (Source).

[Below: German Paratroopers above the Hague]

The attack started at Ypenburg. The Dutch were definitely outnumbered and the only ammunition they had was what they had managed to capture from the Germans. Even then, they fell into position, launching an artillery attack against their own airfield, causing heavy damage. The Germans were finally forced to evacuate “the airfield’s burning buildings, losing their strong defensive position” (Source).

Then Dutch troops stormed the airfield, forcing the Germans to fully retreat. While some of the Germans were able to withdraw and hide in the nearby woods, the Dutch did capture several more.

From here, the Dutch were ordered to turn towards Loosduinen. They sealed off Leiden and Wassenaar, retaking “an important bridge near Valkenburg” (Source). With the arrival of reinforcements, the Dutch were able to start attacking Germans from the ground and from the air. The Germans were forced to retreat, and several battles took place in Valkenburg, all to liberate the village. But it was heavily damaged in the process.

“By the end of 10 May, Dutch forces had retaken the captured airfields, but this tactical victory was to be short lived as on 14th May the German Rotterdam Blitz forced the Dutch armed forces to surrender” (Source).

As for the German failure, well, there were several factors at play. For one, they didn’t have nearly enough paratroopers, especially for all of the objectives they wished to achieve. Then, a number of these were “dropped miles from their objectives” (Source). Furthermore, German intelligence wasn’t nearly up to par, and the information that they did receive was poor. “With the landing strips effectively blocked, the following waves of aircraft were forced to divert, force-land on the nearby beaches or highways, or return to base” (Source). And, to top all of that, after Dunkirk, the Dutch had been busy building up their defense, making sure that their best artillery and armored cars were ready for the inevitable battle.