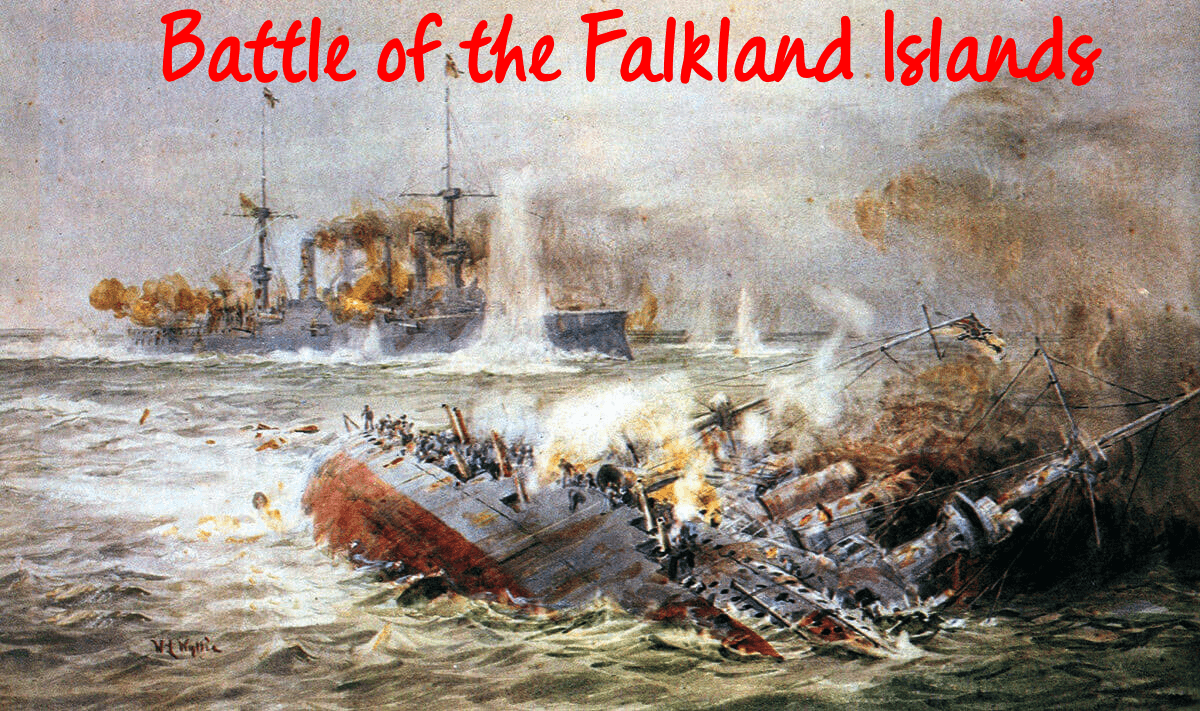 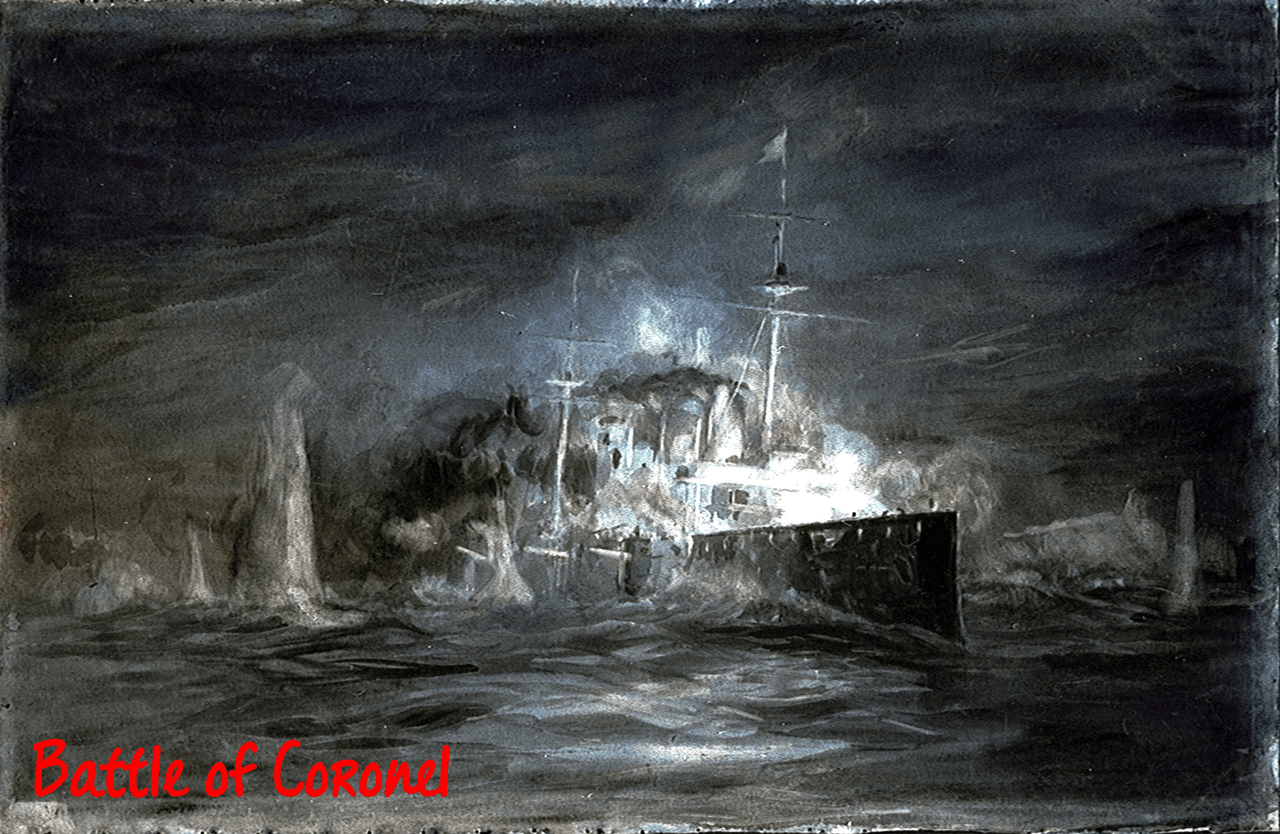 Since the outbreak of war, Germany’s Naval fleet had been blockaded, at least along the North Sea and the Baltic. Despite this, they maintained a heavy presence in the Pacific Ocean, “possessing German New Guinea, the Bismarck Archipelago and islands in the Solomons, Caroline, Ladrone, Pellew, Marshall Groups of Islands, and in Samoa” (Source). The German Navy’s East Asiatic Squadron had a definite presence in Northeastern China.

All this time, the British had been searching for German General Spee. They were in luck when, in early October, they received news from an intercepted radio communication, detailing Spee’s plans to “prey upon shipping in the crucial trading routes along the west coast of South America” (Source). Turned out, the British had a fleet patrolling South America – Admiral Sir Christopher Cradock’s feet, including the armored cruisers Good Hope and Monmouth, the light cruiser Glasgow, and the converted ex-liner, Otranto.

To be sure, Cradock’s fleet stood no chance against Spee’s much more formidable force. Nevertheless, he began to prepare for battle.

Spee, too, began to prepare for battle.

On October 31st, Cradock received wireless signals indicating the presence of Leipzig, one of Spee’s light cruisers. “Cradock ordered his ships to form a line. . . . It was the admiral’s hope to catch Leipzig alone” (Source).

Meanwhile, Spee received news of the presence of the Glasgow. So now, both men had their ships lined up, each thinking the opposing side had just one ship. Of course, both were wrong.

It was at 4:25 pm on November 1st, that the battle began to heat up. John Luce, captain of Glasgow, spotted smoke and quickly notified Cradock. Minutes later, lookouts spotted two additional German ships: Scharnhorst and Gneisenau. Glasgow hoped to inform Cradock of this latest development, but, unfortunately, found that the German vessels had jammed the British cruiser’s radio. It was 4:45.

The Germans, however, “with their newer, lighter ships, took quick advantage, opening fire at 7 pm. Cradock’s flagship, the Good Hope, was hit before its crew could return fire” (Source).

Unfortunately, the British were unable to fire back. Meanwhile, flams were engulfing the Good Hope. “The 9.2-inch gun was knocked out of action” (Source).

To make the battle worse for both sides, the seas were rough. The waves were high and the wind strong. The ships were all being tossed from side to side. Water foamed up over the decks. The crew members had difficulty keeping on their feet. Unfortunately, the rough seas were making it harder for the British than for the Germans.

Worse yet, fires were rapidly breaking out on the other British ships, forcing them out of the battle. The Monmouth had been hit. The ammunition aboard Good Hope exploded. Thanks to the glow of the fires, the British heavy cruisers were easy targets. The Good Hope was hit for a third time, causing the fires to spread even further.

[Below: Destruction of Good Hope] But Glasgow was not going to give in. The gunners aboard Glasgow opened fire on the Scharnhorst and the Gneisenau, hitting them both and setting them both on fire. It was some time before the Germans were lucky enough to hit the Glasgow.

But then they hit her directly, “making a 6 foot square hole. She continued to fight on” (Source).

Unfortunately, the end was approaching for the two British armored cruisers, though. The Good Hope and the Monmouth continued firing, but it was nothing compared to how often they were getting hit by the Germans. “Finally, one of Gneisenau’s shells hit Monmouth’s fore-turret, blowing off the roof and setting the housing on fire. Fires broke out, and there was a deafening explosion” (Source). Another of Gneisenau’s shells hit Monmouth, right near the ammunition storage for the starboard guns.

Though the odds seemed hopeless, Cradock continued to fight on. But, by 7:53, the fire had reached the magazine of Good Hope. “There was a tremendous explosion; flames reached 200 feet above the deck. The explosion was so great that crewmen aboard Nürnberg, six miles away were forced to hold their heads over their ears” (Source).

Luckily, Glasgow came out much better. She was only hit five times, and none of them damaging enough to take her out. This meant that Captain Luce was able to lend aid to the severely damaged Monmouth. But each fire made by the Glasgow was returned by a whole line of fire from the Germans. Before too long, there wasn’t too much Glasgow could do to help Monmouth. Both ships began to retreat.

“Unfortunately, Nürnberg passed close by her while coming up to take station at the rear of the German line and saw the British cruiser. Nürnberg opened fire” (Source). Nürnberg fired for some time at the ship, taking advantage of the fact that Monmouth couldn’t fire back, ceasing fire only when it was clear that the Monmouth was ready to haul down her colors and surrender. But Monmouth never did. Nürnberg continued to fire.

Both Good Hope and Monmouth were destroyed. There were no survivors aboard either ship.

[Below: Sinking of Monmouth] 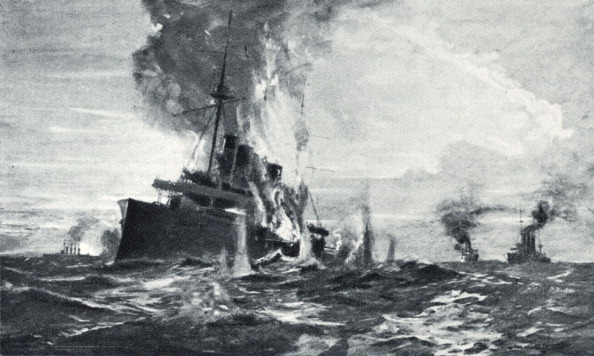