On April 22, 1915, the German 4th Army mounted a surprise attack against the Allies on the Western Front in Ypres, beginning the 2nd Battle at Ypres. They were hoping to divert Allied attention away from the Eastern Front, where it would make it easier on the Germans to fight the Russians.

Not only that, but it is very likely that the Germans were just dying to try out their new secret weapon: Chlorine Gas.

But the battle began as many others do, with a bombardment – in this case, with 17-in howitzers. But as it cleared away, the Germans did not advance as one might expect. Instead, a cloud of chlorine gas wafted down into the trenches. 168 tons of chlorine gas, released from 5,700 canisters, to be exact. This is not what they were expecting.

The gas alone took out two divisions of troops or about 10,000 troops. “The stunned Allied troops fled in panic towards Ypres, the heavy gas settling and clogging the trenches where it gathered” (Source). But it gets worse, because half of those 10,000 men died with 10 minutes, the men dying of asphyxiation. Those who didn’t die almost immediately were temporarily blinded, many of them becoming POWs.

Turned out, the Germans must not have expected the gas attack to work quite as well as it did, because they were so shocked by its effect that they failed to take advantage of their success. As a result, the Allies managed to hold their positions. After a mere three kilometers, the Germans were stopped by the British 2nd Army, under the command of General Smith-Dorrien. The day’s battle was finished, but the Germans were not. 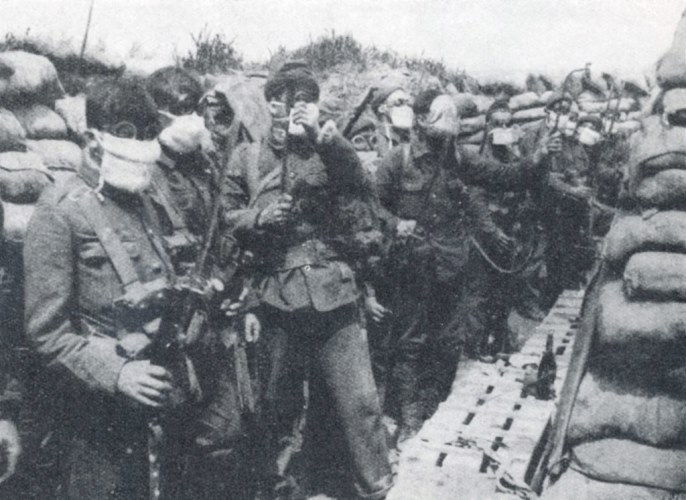 Two days later, they Germans launched another gas attack, this time against a Canadian division. After further bombardments, the Germans pushed forward, all the way towards Hill 60.

This time, however, the Germans endured heavily losses. The Canadians were backed up by British forces, who arrived on May 3rd. Even with the extra help, though, the Allies were pushed all the way back to Ypres, hence the second battle of Ypres. Actually, General Smith-Dorrien had suggested the withdrawal to Ypres, only to be relieved of his command and sent back to England by Commander-in-Chief of the BEF, Sir John French. Unfortunately for French, Dorrien’s replacement, General Herbert Plumer, pushed through the retreat.

This plan allowed the fighting to temporarily halt. But by May 8th, it had picked up once again. It continued on this way, in an on-and-off fashion, up until May 25, when the Second Battle of Ypres finally drew to a close. This was due to one last major German assault that forced that Allies to cede. Meanwhile, on the German side a serious lack of supplies and men forced the Germans to call off any further offensives.

Losses were heavy at Ypres, especially on the Allied side, thanks to the chlorine gas attacks. The Allies suffered as many as 69,000 deaths (59,000 of which were British), while the Germans suffered the loss of some 35,000 men. What did result, though, was the Allies developing their own chemical weapons. These chemical weapons meant a new form of warfare.