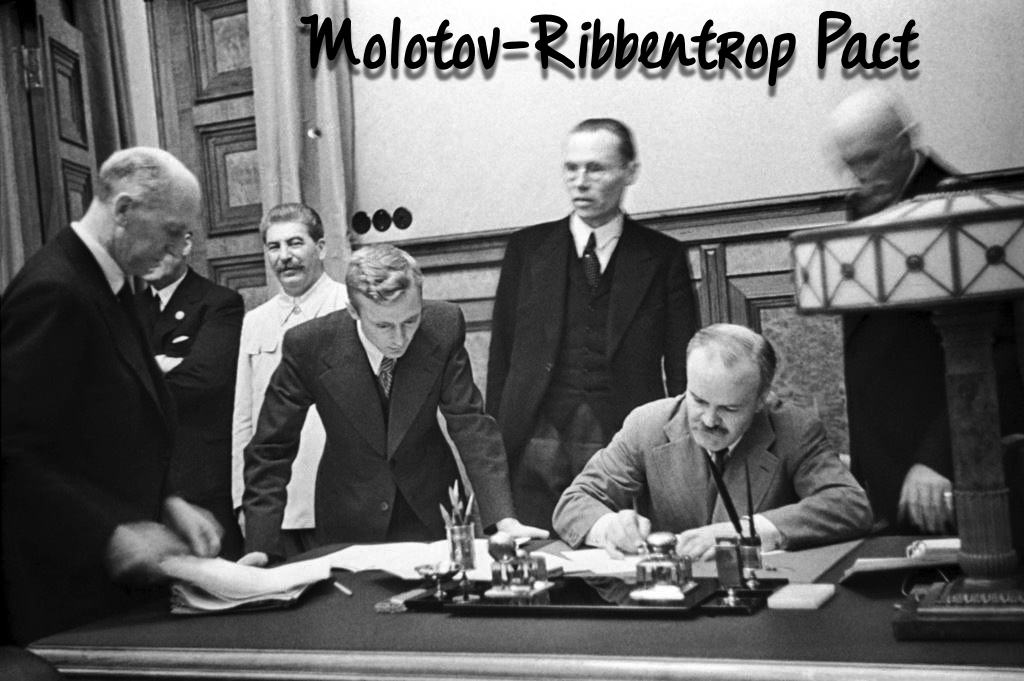 This topic has, admittedly, been touched on in a post about Operation Barbarossa(or will be, in this case). However, I felt a personal need to go back and learn more. A person need, in fact, that will (hopefully) mean this will be a tad more chronological than they’ve previously been.

Despite obvious disregard for each other (maybe mostly due to their all-too similar world domination goals), it seemed important to improve relations between Germany and the Soviet Union – especially in the face of war. This seemed necessary, maybe also because of their distrust, Hitler reportedly calling Stalin “the greatest danger for the culture and civilization of mankind which has ever threatened it since the collapse of the . . . ancient world” (Source).

So, to reduce the chances of fighting another two-front war (which we all know he did not avoid), Hitler “begun exploring the possibility of a thaw in relations with Stalin” (Source).

These negotiations began on an economic front, and eventually they were able to reach a truce regarding trade and supplies. Additionally, they spoke of the reasons behind their earlier “foreign policy hostility,” hoping to find “some common ground in the anti-capitalism of both countries” (Source). However, previous relations on the Soviet Union’s part with France and Britain (to be discussed soon!) made this difficult.

On August 22, 1939, while Hitler was working on plans to invade Poland, German foreign minister Joachim von Ribbentrop flew to Moscow to meet with both Stalin and Soviet foreign minister, Vyacheslav Molotov to work out further negotiations. Of their earlier hostilities, von Ribbentrop explained that their Anti-Comintern Pact had, in fact, not been directed at the Soviet Union, but at Britain: It was “aimed at Western democracies” mostly “British financiers and English shopkeepers” (Source).

[Below: Signing of the Molotov-Ribbentrop Pact]

With von Ribbentrop came a non-aggressive proposal agreement from Hitler: 100 years of peace between the two countries. Stalin countered that 10 years “would be sufficient” (Source). Hitler added another stipulation, another one that seems odd given the knowledge of his later plans and actions: “Neither country would aid any third party that attacked either signatory.” Lastly, he included “secret protocol” about their plans for (aka influence over) Eastern Europe once Hitler invaded Poland (Source). Stalin could have control over Eastern Poland, as well as the Baltic States: Estonia, Latvia, Lithuania, and Finland.

In the early hours of August 23rd, von Ribbentrop called to inform Hitler that they’d been successful. Hitler “was ecstatic” (Source). In the later hours of the 23rd, Germany and the Soviet Union would sign the German-Soviet Nonaggression Pact, also known as the Molotov-Ribbentrop Pact, it’s signers being Molotov and Ribbentrop.

The Pact would be beneficial to both sides. Stalin viewed it “as a way to keep his nation on peaceful terms with Germany, while giving him time to build up the Soviet military” (Source). For Hitler, it would “clear the way for Germany’s attack on Poland” (Source).

On August 25th, the signing of the Pact was publicly announced with great fanfare. Meanwhile, Hitler’s plans of a blitzkrieg on Poland for the same day were foiled by Poland’s pact with Britain and France. Hitler’s plans were not cancelled, though, only postponed.

News was met with shock, largely because of the Britain-French-Soviet relations, but was also met with shock by Germany’s other allies.

[Below: Soviet colonel and German officers discuss the Soviet-Nazi demarcation on a map of Poland.]