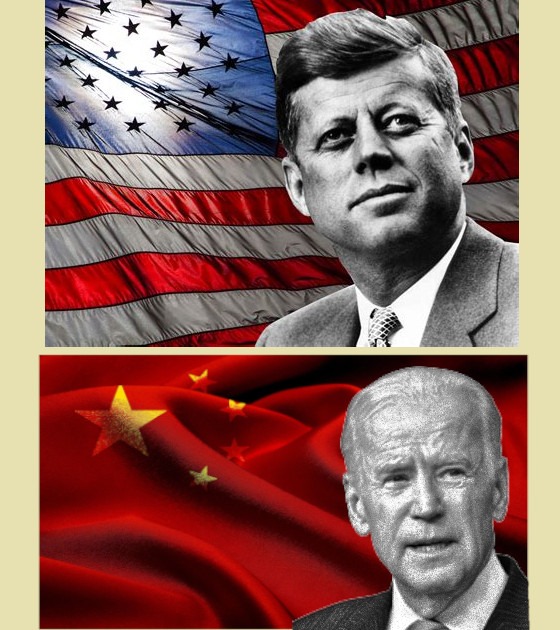 Kennedy and Biden On Opposite Poles

There have only been two Catholic US Presidents, John Kennedy and Joe Biden. Comparing the two, the similarities stop at religion. In every other detail Kennedy and Biden are complete opposites.

John Kennedy served in the US Navy during WWII and earned the Navy and Marine Corps Medal for his service and war heroism.

Joe Biden dodged the draft during the Vietnam War by obtaining five student draft deferments, at a time when most draftees were sent to the Vietnam War. Later Biden obtained a medical deferment.

Kennedy’s administration included high tensions with communist states in the Cold War. Kennedy stood up to Russian in the Cuban missile crisis of 1962.

Joe Biden and his son Hunter have business ties to Russia and communist China.

Kennedy presided over the establishment of the Peace Corps and Alliance for Progress with Latin America working for a better life and stability in South America.

Biden supports communists in South America and opened the southern border to an influx of criminal and militant groups from Latin America.

Kennedy supported the Apollo program with the goal of landing a man on the Moon before 1970.

Biden shut down the US space program.

Biden supports communists and socialist movements focusing on dividing the US and reintroducing discrimination and segregation based on race and color.

Biden has placed the US in unprecedented record debt.

Kennedy planned to invade Cuba and instigate an uprising among the Cuban people, hoping to remove Castro from power. Kennedy approved the final invasion plan on April 4, 1961.

Biden supported the communist government in Cuba during the 2021 uprising shutting down all communication in and out of Cuba and turning away Cubans seeking asylum in the US.

Kennedy sought to contain the perceived threat of communism in Latin America by establishing the Alliance for Progress, which sent aid to some countries and sought greater human rights standards in the region.

Biden supports full term abortion with no restrictions for women and men and unrestricted medial use of aborted fetuses.

Kennedy was the second youngest US president

Biden is the oldest US president